Wordless Wednesday: Lion and Tiger and Bear, Oh My! 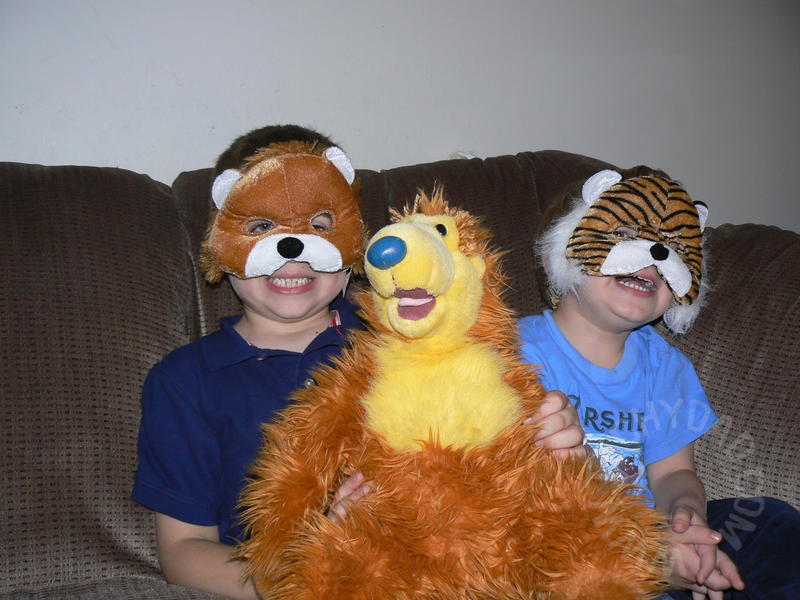 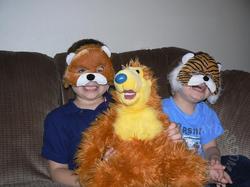 My parents visited over the weekend and we all had a blast. First, we went to a local playground. While B pushed JSL on the swing, NHL skipped the usual slides/climbing playtime routines to check out the hedge maze. Soon enough, his brother joined us and we were running through the winding hedge maze paths together. We also checked out the duck pond which seemed short on ducks but loaded with fish and people sailing model boats. 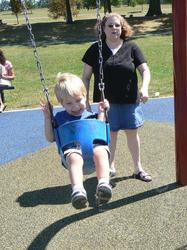 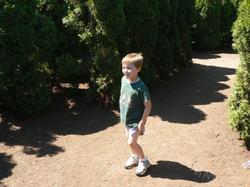 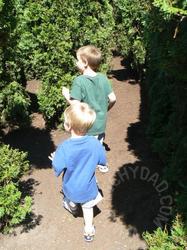 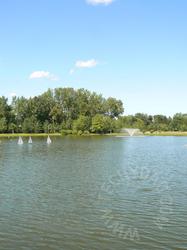 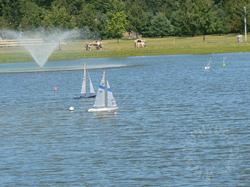 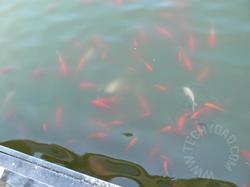 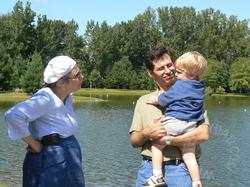 After this, we went to a local ice cream place for a sweet treat. Here we learned three important lessons: 1) Their small is really large, 2) They have huge ears of corn for sale, and 3) They’ve got cows! In fact, JSL seemed more interested in the moo-ing cows than his ice cream. (Sadly, the cows weren’t out on a return trip the next day.) 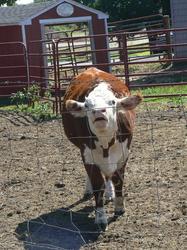 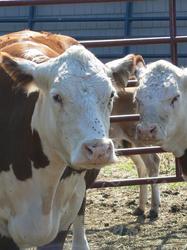 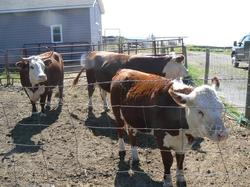 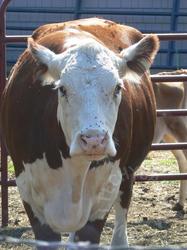 The next day, we went to the Altamont Fair with my parents, B’s parents, B’s brother, his wife and their kids (aged 2 and 5 months). Here we went on a lot of rides: 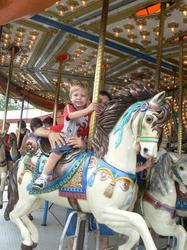 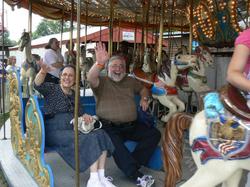 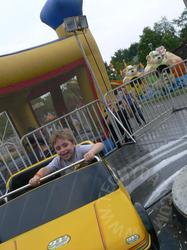 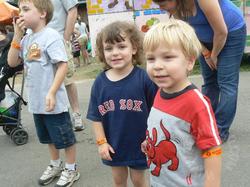 We also saw horses and rabbits: 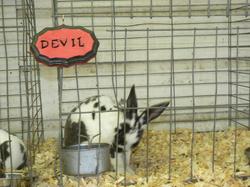 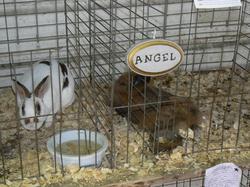 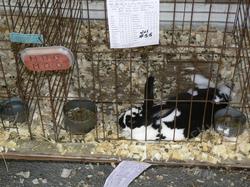 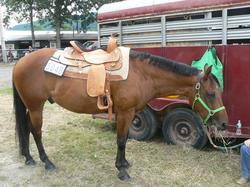 By far the most terrifying experience (for me, at least) was the ferris wheel. You see, I have a huge fear of falling. So why would I willingly go up 100 feet in one? For the photo opportunity of course! My photo geekery did battle with my falling fear and won. In the photos below, see if you can spot B and our families talking. (For a better look, click on the photos.) 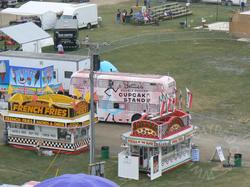 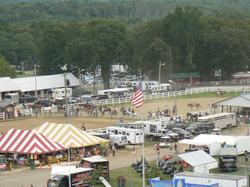 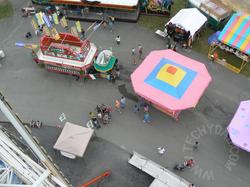 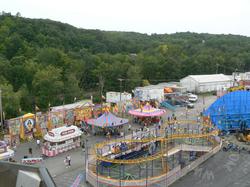 All in all, it was a fun, but exhausting couple of days. It didn’t help that the day after this was NHL’s 7th birthday party. But that’s a post for another day.

Gorilla of my Nightmares #DisneySMMoms

Before DisneySMMoms, we were already at Disney World enjoying some of the parks. While at Animal Kingdom, on the first day, we found the gorilla exhibit. The gorillas are separated from the humans by a big moat. This is, of course, to protect us from them and vice versa. The moat didn’t quite seem wide enough, though, thanks to this guy 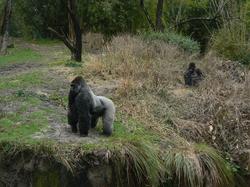 He started charging the crowd, stopping just before the moat drop. Yes, I knew I was safe, but I still jumped back. Then, I swear he glared at me. Look at his eyes! 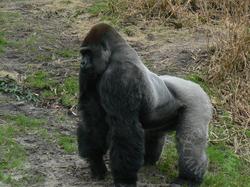 Wouldn’t that scare you even with a moat?

More Roar or How Walking With Dinosaurs Affected JSL

On Saturday, we had the pleasure of seeing Walking With Dinosaurs: The Live Experience.  For those of you who don’t know what this is, you travel back in time and see some real, live dinosaurs.  Ok, they’re people in costumes and animatronics controlled by people, but the production values are so good, you’d swear the dinosaurs are real.  The scale is fully kept too, so when the Brachiosaur stomps onto the stage, it is nearly 33 feet (10 meters) tall.  And when the mother T-Rex comes charging in, she is over 26 feet (8 meters) of flesh tearing, loud roaring dinosaur.  (Reminder: Do *NOT* mess with this momma’s kid.  The kid may seem small and weak but the mother can eat 144 pounds in a single bite.  The average adult wouldn’t be more than a mozzarella stick is to us.)  The whole production mixes science and entertainment perfectly.

NHL, of course, loved it.  His favorite dinosaur kept shifting depending on which dino was on stage last.  We took JSL along, hoping he wouldn’t be scared by the loud noises.  Towards the end, he was a little jittery, but not completely freaked out.  A little reassurance that daddy was there and he was fine.  We figured the long-term affects of the show would be more evident with NHL than with JSL.  (We signed him up for an archeology summer program at the local community college.)  However, tonight JSL showed that he too liked the dinosaur show.  At least, he liked the roaring and charging parts of it.  Don’t just take my word for it, though, see for yourself.

After the Ghost Walk, I returned to my room, set my alarm for 6:30am, and fell asleep.  I neglected to do one important thing, though:  Test the volume on the radio in the room.  Consequently, I woke up at 9:15.  Panicking, I quickly showered, got dressed, and sprinted off to breakfast at 9:30am.  It’s got to be a new record for me. (Getting ready that fast, not being out by that time.)

They had quite the spread at the inn.  Bagels, eggs, grits (my first time trying… quite good!), muffins, french toast, etc.  After breakfast, I hung out in the honeyroom suite with my friend and his bride-to-be.  It was then that I took the photos off my camera and discovered the creepy face.  I also took photos of their many turtles.

Next, it was Tux time!  We drove out to the tuxedo rental shop.  It was tucked away and tough to find, but we managed to locate it.  Then, while some last minute alterations were done, we walked around the nearby shops grabbing some snacks.  I’m proud to report that my friend (who usually doesn’t like trying new things) tried Hummus for the first time as well as a bagel with Caraway seeds.  He liked both.  (I recommended making a Hummus and Feta cheese sandwich for a healthy lunch.)

Once we had our tuxes in tow, we headed back to the inn. Unfortunately, we took a wrong turn or two, but eventually found our way back.  Some profuse appologies to the bride later, and we ran through how the wedding was to proceed.  My job as a groomsman was easy.  I walk down the aisle, stand in the line during the service, then walk out with one of the bridesmaids.  Simple.

The only complication was that I seemed to have developed a bad cough the week before and it wouldn’t go away.  I started getting afraid that I’d ruin the service from excessive coughing.  I took the rehearsal as an opportunity to try different techniques to suppress the cough.  (I should have gotten some cough syrup when we stopped by Piggley Wiggley after getting our Tuxes, but I didn’t think of it at the time.)

After the rehearsal, we had some down time until the rehearsal dinner.  I used my time to (what else?) take more photos of the grounds.  This time, I also stopped by their stables to take some horse photos.  These came in handy on the bus as a little girl named J was upset.  My daddy instinct (which was going through withdrawal being away from my boys for so long) kicked in and I inquired what was up.  It turned out that they didn’t have time to see the horses which J loves.  He loved horses so much, in fact, that her entire room at home was decorated in horses.  When I found this out, I took out my camera and showed her the horse photos that I had taken.  Seeing the horses helped calm her down.

The rehearsal dinner went smoothly.   The food was good and the restaurant even accomadated a special need of mine.  It seems that the pasta was mixed in the same sauce that they use to cook their meatballs and sausage.  Since I wouldn’t eat those, they brought me a special plate just for me.  (The dishes were family style otherwise.)  Yes, I took photos of the food too.  I think my camera rooted itself to my hands during the trip!

After the dinner, I went back to my room and prepared for the next day’s events.  Coming up next:  It’s Wedding Day!