I’m sitting here scratching my legs, arms, and neck.  Why, you ask?  Last night, our handyman stopped by to fix some stuff on the outside of our house.  The kids wanted to see what was going on so we let them outside.  Then, quickly getting bored of guys standing on a van’s roof inspecting siding, they decided to play with some balls instead.

While they did this, I took the opportunity to go to our tomato plants.  You see, I had watered them earlier and noticed a big, brown spider on one.  A kind of spider that I haven’t seen before.  Being the geeky bug photographer that I am, I tried to get a photo of him.  Unfortunately, the shy spider sensed my efforts and crawled to the safety of the underside of a tomato leaf.  While I was in my work clothes, I wasn’t going to get onto the ground to get a good photo.

Luckily, I was now in casual clothing.  So down on the ground I went, positioned my lens pointing up, and captured a few shots of the mystery spider. 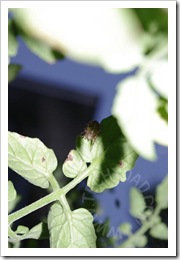 Here’s a crop of the original so you can better see him since I know you all are so eager to see it up close and personal.  (Don’t forget to click the photos to see them larger.) 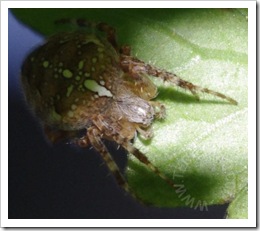 I even got a shot of the spider on its web.  This is the spider’s underbelly.  Would this count as spider-porn?  Look at that cephalothorax! 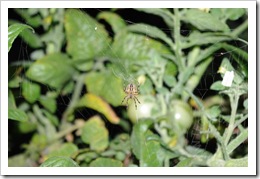 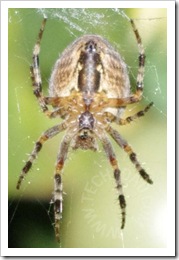 Getting back to the itchiness, though.  As night descended and our handyman finished up his work, I began to get the boys ready to go in.  At about this time, I began to realize that I was itching.  Not just from one spot either, but all over.  It felt like my legs and arms were on fire.  I suddenly realized that all of our running and playing had turned me into a mosquito all-you-can-eat buffet.

We shuttled the boys in and we all took showers.  I scrubbed extra-hard with an abrasive shower scrub brush.  It might not have been the best thing for me, but it felt SOOOO good.  Sadly, the itching continued well into the night and the next day.

Just to end on a non-itchy note, I’ll flash back to the weekend when we went to a local amusement park for the last time this season.  The last time the boys went with B, she was alone and thus NHL couldn’t go on the bigger kid rides.  (B couldn’t go on with him and leave JSL alone.  Neither would NHL go on them by himself.)  This time, though, we were able to split up.  NHL and I headed for the rollercoaster and Ferris Wheel.  JSL and B went to the more little kid-friendly rides.

As we boarded the rollercoaster, I realized I had made a horrible mistake.  I left my camera at home!  Bad, photographer geek!  Therefore there is no photographic evidence of our thrilling rollercoaster trip.  (Well, mildly thrilling.  It’s a small rollercoaster for a small amusement park.)

As we boarded the Ferris Wheel, I remembered my camera phone.  Of course, my fear of falling kicked in once we got to the top.  The rocking cart, long way down and very windy air at the top all factored in.  Still, I managed to shoot a few pics before fear completely took over and I clutched my phone close to me as if it were going to leap out of my hands and plummet down. 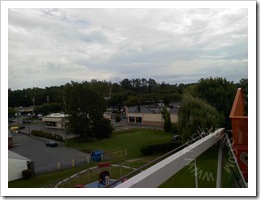 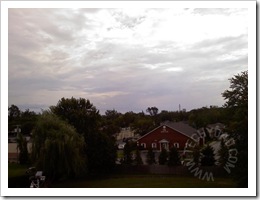 As we were up in the air, I even spotted B and JSL heading for a ride.  We yelled at them and they finally looked up.  B took a photo of us hanging in the air. 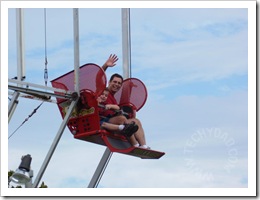 Next time we go (which will have to be next year), I’ll need to take my camera up with me.  Yes, I’ll brave my fears if it means getting a nice photo.  Geekiness overrules fear in my book!

Update: Thanks to @reptileadventur, we now know that our mystery spider is a marbled orb-weaver, Araneus marmoreus.  From this website, I learned that it doesn’t bite humans, but dines on flying insects.  (Given my recent encounters with mosquitoes, I say dine away Mrs. Spider!)  I also found out that it builds its web at dusk every day and waits there or in a nearby retreat.  Once an insect hits the web, “the spider runs out and wraps the prey in silk. After the prey is immobilized, the prey is bitten and eventually eaten.”  Yummy!

What The Bug Is This?

Thanks to the air conditioning units in our windows, we’re able to stay cool on these hot, hot days.  Unfortunately, since there are gaps in the window/AC unit, we also get some unexpected visitors.  Like this little guy. 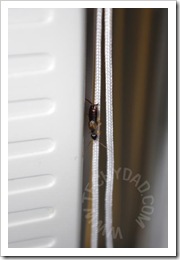 He’s a bit small, so here’s a closer look. 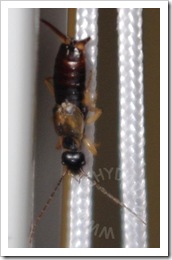 His visit was short-lived as he met a squishy end.  This was the fourth of these critters that have invaded our home.  We can’t help but wonder what kind of bug is this?  Are they living in our house or just coming in from outside?  Any ideas?