I’m a big science fiction fan.  A staple of science fiction is alien civilizations making contact with humans.  Of course, we’ve yet to actually make contact or even find non-intelligent life out there.  This isn’t to say that we haven’t looked.  We have.  We have detected planets outside of our solar system.  We have even sent probes to other planets within our solar system.  So why haven’t we found alien life?  Perhaps it is just that the Universe is a big place.

The following is an image that the Hubble Space Telescope took of a tiny fragment of the sky. 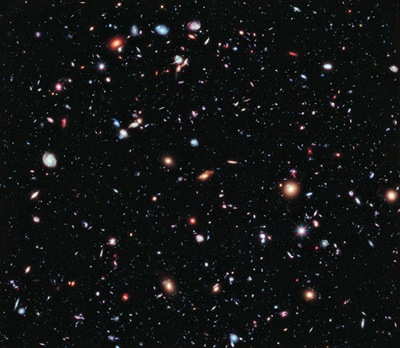 Just how tiny?  Well, this box shows the segment of the sky involved next to the moon. 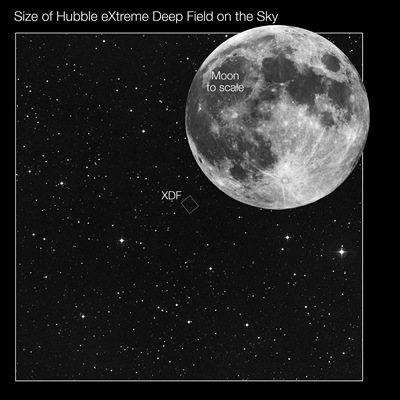 My personal theory is that time, language, and distance are the main factors.  As I discussed previously, stars are very far apart from one another.  We’ve only been sending signals into space that alien civilizations could detect for under 80 years.  Already, we’re transitioning to technologies that might be harder for a hypothetical alien to detect.  For example, we’re moving towards television transmitted via a wired Internet connection instead of via a TV tower that blasts the signal in all directions (including into space).  As we do this, there will be less and less for aliens to detect.

Perhaps civilizations send out a blast of detectable signal before vanishing behind wired connections.  If so, time works against us (and our hypothetical little green friends) in another fashion.  When the alien signals pass us by, are we able to detect them?  Perhaps the alien version of daytime TV was flooding past our planet, right there for anyone to pick up, but we were stuck in the Dark Ages.  Maybe, while we were frightened of demons in the dark, proof of alien life was passing right in front of us.  Possibly, a similar thing will happen with us.  When old I Love Lucy broadcasts transmit past a planet with alien life, will the aliens be technologically savvy enough to detect it?

That brings us to the second point: Language.  Specifically, would we recognize a signal as alien as opposed to gibberish.  Suppose you didn’t understand Russian at all.  If you heard five recordings, four with nonsense words and one of someone speaking Russian, it might be tough to pick out the real language.  Now give that language an alien origin and see how you do.  Now compress that signal using a method devised by aliens and would you even be able to tell that it wasn’t background noise?

Finally, we get to distance.  Like I said earlier, there’s a huge distance between the stars.  There’s an even bigger distance between galaxies.  Perhaps aliens are out there all around us, but we can’t see or hear them because they are so far away.  If an alien was in the Andromeda Galaxy, one of the nearest galaxies to ours, they would be over 2.5 million light years from us.  This means that a message sent from them would take over 2.5 million years to reach us.

Science Fiction supposes a way to travel and communicate faster than light, but suppose science fiction is wrong.  Suppose that the speed of light is the ultimate speed limit in the Universe.  There could be millions of alien civilizations out there, all looking up at the stars and asking the same question: "Is anyone out there?  Are we alone in the Universe?"

NOTE: The Hubble images come from here and here.  Both images are free for anyone to use as are many other wonderful images from the Hubble Space Telescope.

I’m attempting to write this blog post while watching episodes of Doctor Who on Netflix.  Along with my recent Doctor Who obsession, I love Star Wars, Star Trek, and Farscape.  I’m also a big fan of written science fiction, especially the Foundation series by Isaac Asimov.  The common theme between all of these?  Space.

Space fascinates me.  It is huge.  Mind bogglingly huge.  We’ve looked out into the vast reaches of space and have seen some amazing wonders.  We’ve even sent robots to other planets that send us back photos and data.  However, in the entire history of the human race, only twelve people have ever walked on a world that wasn’t the Earth.  Of these, Neil Armstrong was the first.

I think any geek’s ultimate dream would be to go into space.  To float above the Earth where all of the politics and national conflicts seem so tiny.  To see the stars up close and personal instead of viewing it as it once was* from far away.  To swim through the vast ocean that is the Universe.  To walk on another world.  Neil Armstrong actually did this.  He walked out of Apollo 11 and put his bootprints on another world.

That alone would have been enough for most folks, but it didn’t begin or end there.  Before that, on the Gemini 8, his ship was docked with the Agena when they went into a rapid spin.  Of course, this was highly dangerous.  I wouldn’t have blamed Mr. Armstrong if he panicked.  It would have been very easy too.  But he didn’t.  His cool head and quick thinking saved the people aboard the ship.

Even Apollo 11 was saved thanks to Neil.  He noticed that the ship was headed for an unsafe landing, took manual control, and guided it to a better location.  Again, his quick thinking and action saved lives and made the "one small step" possible.

Finally, he was a humble man.  Most people, having been the first to walk on another world, would have signed book deals, endorsed products, and ridden their fame for the rest of their lives.  Not Neil Armstrong, though.  He did accept a spokesperson gig or two, but mainly preferred to stay out of the spotlight.

Neil Armstrong died and the world lost a great man.  From his accomplishment, eleven other men walked on the Moon, but then it ended.  On December 13th, 1972 – almost 40 years ago – Harrison Schmitt and Eugene Cernan left the Moon and mankind never returned.  I was born in 1975.  In my lifetime, man has been limited to mere low Earth orbit.

If the Universe is a vast ocean, then going to the Moon is splashing our feet up to our ankles on the shore.  It should be the start of more.  Instead, we splashed our feet a bit and then retreated back to dry land.  We need to go back into the ocean again.

I want to see a lunar landing in my lifetime.  The first lunar landing was an amazing event (so I’ve heard).  Imagine what the first one in over forty years would be like.  We could have live HD streams from the moon.   Astronauts could answer questions posed to them from Earth via Twitter.  (Now that would be the Ultimate Twitter Party!)  Yes, science would be done, but the positive PR for space travel alone would be tremendous.

Goodbye, Mr. Armstrong.  You were a hero to us all.  Here’s hoping that someday in the future, we can watch as the next generation of Astronauts follows in your footsteps by leaving their own on the Moon and beyond.

* Light travels fast, but even light has it’s speed limit.  So when an object it very far away from us, the light that is reaching us took a long time to get to us.  Look in the night sky and the stars you see aren’t really there anymore.  They’ve drifted into other positions or perhaps even died out.  The night sky is filled with ghosts of the past.  It’s a real-life time machine, even if you can only look into the past.