Where Trump Language Spam Is Coming From 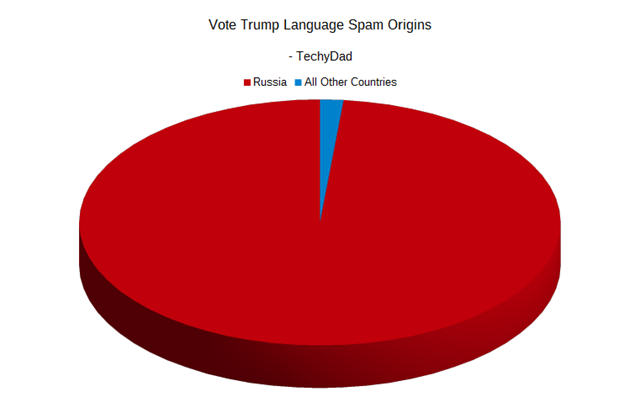 A few days ago, I noticed a tweet from Amy Ozten:

If you’re a blogger, check your Google Analytics. There’s such a thing called Language Spam, and you might have it. https://t.co/oZ4mIkwF7P

I decided to look at my Google Analytics to see if I was being hit with this. When I loaded the stats for my new GhostThiefNovel.com website, I saw a big spike in traffic. My first thought was “hooray! My efforts to get the word out about my novel are paying off.” Sadly, though, my traffic hadn’t spiked all that much. Instead, my Ghost Thief site was being hit with the very Language Spam that Amy Oztan was talking about.

Needless to say, this upset me a bit. And when I’m upset, I tend to do what I always fall back on…

(What? Everyone doesn’t collect data when they’re upset?)

I checked some other sites I manage and sure enough many of those were hit with the language spam just like my Ghost Thief site was. Thankfully, I was able to create a Google Analytics filter to weed out the spam. It won’t block the spammers from hitting your site (something that I’m actually working on), but it will let you see your actual traffic minus the “Vote Trump” language spam. Fortunately, Google lets you share out custom built filters (they call them segments), so click here to add it to your Google Analytics.

Next, I started to wonder where all this language spam was coming from. Was this spread out all over or was it localized in one region? I went through all of the sites whose Google Analytics I have access to and put together a spreadsheet. The results were obvious right from the start. There was a large array of countries that the spam was coming from including France, Japan, Hungary, and even the United States. By far, though, Russia accounted for the most language spam traffic. Russia’s share was 98.4% of the traffic. The closest countries – the United States and Ukraine – were tied at 0.19% each.

Put in a graph:

What’s the takeaway from this? Well, Russian hackers have been in the news a lot, so it’s tempting to bring them up and try to link these two topics. I don’t think they are linked – except in the sense of Internet “bad guys” coming from Russia. Also, it’s tempting to just say “Block all traffic from Russia,” but valid traffic can come from there as well. If your target audience is localized enough, blocking a whole country might work, but this definitely isn’t the right solution for most people. Instead, for now, use the Google Analytics filter to get your real traffic numbers and stay tuned as I work on my “anti-language spam” Google plugin.

Oh, and check out my book’s website. It’d be nice for the numbers to spike because of real traffic and not because of some spammers.

I’ll admit it. I’m not a big Black Friday fan. I don’t like getting up early and fighting crowds even if the deals seem good. Years ago, when stores first started “Cyber Monday”, that was more my speed. Recently, it seems that Cyber Monday has simply been rolled into an online version of Black Friday. Honestly, this makes more sense and I’ll happily visit my favorite sites to get a good deal.

This got me to thinking. I have something that I’m selling now. Why don’t I have my own Black Friday sale? Of course, I want to give people as much chance as possible to buy my book at the sale price so my “Black Friday” sale will go for eight days instead of lasting for just one.

From Friday, November 25th to Friday, December 2nd, the Kindle version of Defenders of Shadow and Light: Ghost Thief will cost only $1.99. This is a 60% savings off the normal price of $4.99. If you’ve been unsure whether you want to read this book, now’s your chance to get it for under two dollars.

Of course, I can’t sign Kindle copies, but if you want a signed paperback copy of Ghost Thief, you can enter either my Great Ghost Thief Giveaway or GayNYCDad’s giveaway to try to win a copy. 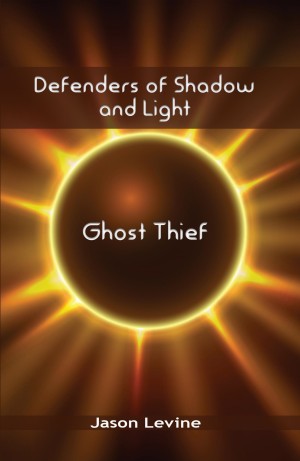 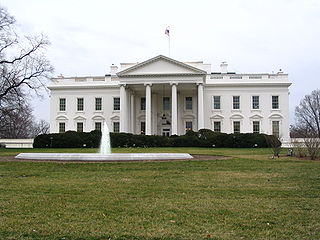 Today I’m in shock. Despite all odds and polls, Donald Trump was elected President of the United States of America. I began watching the election results expecting Hillary Clinton blowout and instead Donald Trump is our new President.
So where do we go from here? Well, right now, I have a ton of questions and no answers. It actually all depends on what Donald Trump says and how he acts over the next few days and weeks.

The big questions swirling in my mind (in no particular order):

Will Trump and the Republican Congress with to repeal marriage equality?

What does this mean for healthcare? I’m guessing they’ll finally repeal Obamacare, but what will it get replaced with? What will be covered? What won’t be covered anymore?

During his victory speech, Trump said that he wants to work with all Americans. Is this the case or will he enact policies/push for laws that favor Christians over other religious groups (Muslims, Jews, Atheists, etc), whites over minorities, and men over women?

How will President Trump handle world affairs? Will Trump act in a manner that will make our traditional allies pull away from us?

What does this mean for libel laws? Trump said he wants to open them up to go after people who printed not-so-nice things about him. Will he actually try to do this? Even if not, will he work to “get revenge” in other ways? (Shades of Nixon’s enemies list.)

Will future Presidential candidates feel the need to release their tax returns? After all, Trump didn’t and was elected President.

How much will this embolden the racist/sexist/anti-Semitic portion of Trump supporters? I’m not saying that everyone who voted Trump was like this. That’s be ridiculous. However, these people were very vocal and he often retweeted their posts. His election will make them think they have more political power. Will they really?

On a related topic, will this turn into Tea Party 2.0 – where Republicans who aren’t extreme right enough get kicked out of office? Will this result in more policies that are bad for anyone who isn’t a white, Christian male?
There are many more questions I have, but they are all kind of swirling together. My take on the future? I’m trying to be hopeful that President Trump isn’t a disaster. As much as it might be tempting to hope this so I can say “I told you so”, it would mean dark days for the next four years. Instead, I hope Trump surprises me and is a decent President. I’ll admit that it’s a struggle to be optimistic, but I’m making an effort to hold on to optimism because dispair doesn’t solve anything.

Note: The White House image above is a public domain image available from Wikipedia Commons.

The Tough Task of Book Publicity – How Do You Sell Your Work?

Now that we’re back from our trip to Disney World (more on that in another blog post) and life is getting back to normal, it’s time to get serious about a little thing called book publicity.

Writing a book isn’t easy. It’s a lot of time and effort to plan it, write it, and edit it so that it’s ready for print. Many people might think that the hard work ends once the book is published. This could be true. I could easily just say “It’s published and done” and then move on to the next project. Unfortunately, if I do that, then few will know about my book and fewer will buy it. It’s not like I’m expecting my book to appear on the New York Times bestseller list. As nice as that would be, it’s not realistic at this point.

For people taking the standard book publishing route, there are various ways of promoting your work. You can go on a book signing tour across book stores throughout the country. You can appear on television programs to peddle your novel. You can even have your publishing house’s publicist pushing your book using all of their marketing experience.

On the other hand, when you’re self published, like I am, you don’t have a big publishing company’s resources to back you up. Instead, you need to put effort into getting the word out yourself. One big method of publicity I’m going to rely on is social media. That essentially means that I’ll be relying on people on Twitter, Facebook, and other social media networks to help get the word out. There are also other methods such as giving away signed copies (hint, hint… check back here soon). I’ve also sent review copies to some bloggers so they can post their own reviews and giveaways. (If you’d like a review copy, just let me know.) Finally, I’m in the process of contacting local newspapers.