In developing my Twitter application, I decided that I needed to know how many users the average Twitter user follows.  To accomplish this, I started a poll which was a pretty sad failure.  Only 5 people responded and two of them were myself and my wife.  However, all was not lost.  As part of my Twitter application, I cache lists of who a user follows.  (This helps reduce my impact on Twitter’s servers.)  I checked and I had over 10,000 users’ information cached.  So I wrote a quick script to query that information.  The results were quite enlightening.

Using OpenOffice.org, I graphed the results and came up with this interesting chart: 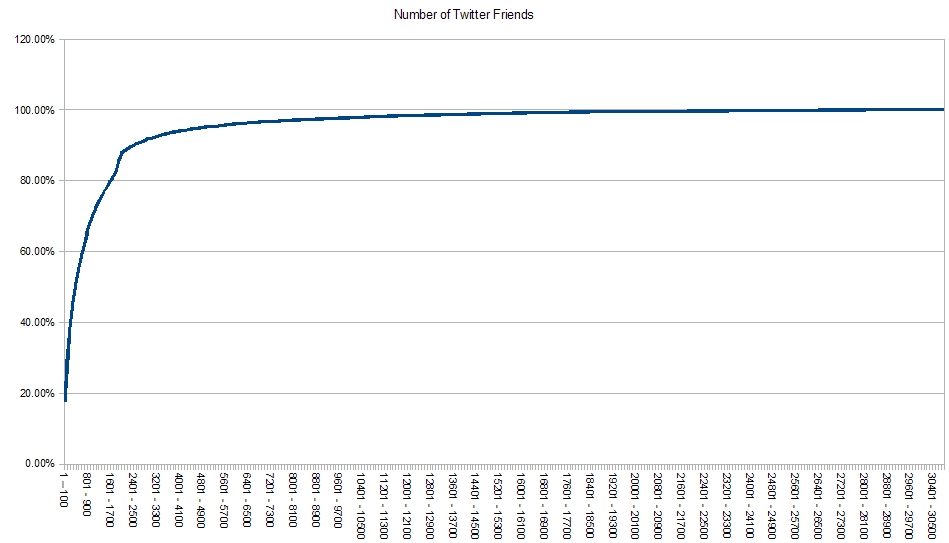 As you can see, the percentage of users climbs sharply until around 2,500 followers.  Then it levels off for a slow ascent to 100%.  This really helps me.  If I make my application cut off checking the Friends list at 2,000 people, it will handle the complete lists for 85% of users.  I’m willing to have partial functionality for the top 15% of users (who are likely to not need my application as much) to preserve functionality for the bottom 85%.

If you’re interested in more data from this, let me know in the comments below and I’ll see what I can do.