(Not So) Wordless Wednesday: Vines and TechyDad Tarzan

On Monday, we decided to clear some grape vines that had been growing behind our garage for a long time. These vines were quite big and we were worried that they would soon begin damaging the garage. First, I cleared a weed-jungle from the side of the garage and then I was able to tackle the vines. The problem was that these vines were thick. I mean between 2 and 4 inches thick. I had to use a saw to steadily rip them apart. 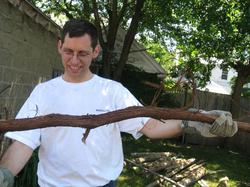 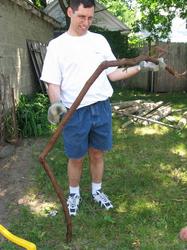 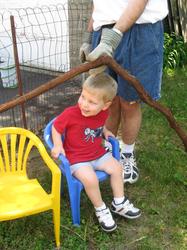 After they were detached from the source, I had the fun task of pulling as much as I could down. Some were tangled on lines (not power, possibly cable or phone) so those weren’t touched. However, the ones that were tangled up in our tree were fair game. While the kids looked on, I pulled and pulled and pulled. The vine didn’t budge. Finally, I put all my weight on the vine and it still didn’t move. But I did. I swung a short distance and suddenly felt like Tarzan. Yes, I’ll admit that I considered leaving it up for a fun backyard activity, but thought better of the idea. Our neighbor came over and pulled with me. The vine was tolerating both of us for a bit but slowly gave way. Eventually, the whole thing came down. I didn’t measure it but I’d estimate it was about 30 feet long. Impressive. Most impressive.

Here I am being swallowed by the vine. 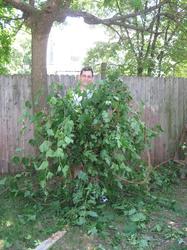 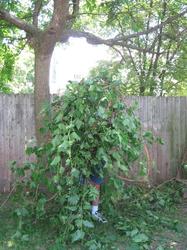 Then I went to work on its cousin. This time, B videoed my not-so-successful Tarzan attempts. It wasn’t that the vine couldn’t support my weight, but rather that I found it tricky to get a good grip. Otherwise, I could have easily swung around the yard doing Tarzan yells. (Now *that* would have made for a good video!)

Now I just need to call someone to remove the vines from the cable/phone/whatever lines.