Of Plans and Pipes

I had planned on a blog post today showcasing a sandwich I made called The Veggie Elvis. It would have been the first in a Cooking With TechyDad series featuring peanut butter (specifically Peanut Butter & Company peanut butter) as the featured ingredient. Unfortunately, I was a little distracted with a burst pipe leaking water all over my basement. I’m not going to recount the whole story, B did that quite nicely, but I will add bits and pieces to it.

First of all, after I went downstairs and located the spot that was leaking water, I took this photo. 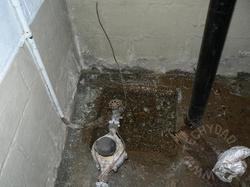 As you might be able to make out, there’s a hole in the floor about 8 inches deep and not only is it filled with water, but it is overflowing across most of the basement. Now, we’ve flooded before so our stuff is up on palettes. This (plus the fact that we store everything in Rubbermaid containers) saved us from any damages. Still, having water flooding in isn’t something you should ignore. After all, if the pipe burst completely, the damages could rapidly rise.

After they shut off the water and we were at B’s parents house, I headed back to our house with a simple plan. Take our wet-dry vacuum and suck up the water. My first priority was that hole since the plumbers needed to reach that pipe. So I cleaned out the vacuum, removed the filter (only used for dry operations) and carefully strung an extension cord over to the mini-lake. After carrying the cord over and hooking up the vacuum, I tried it out on some small water spots and then focused in on the main flood.

I quickly discovered a flaw in my simple plan. The hole, like I said, is about 8 inches deep. That might not seem like a lot, but it turns out that it holds a lot of water. My 6 gallon wet-dry vacuum was overwhelmed and heavy from all the water in its belly. My first idea was to pour it outside, but lugging the vacuum up and down the basement steps over and over was not happening. A quick call to B and we both realized the easiest solution: the hole in the floor.

We have a hole in the center of our basement floor that leads to the sewers. In the past, it’s been a thorn in our side, backing up during bad storms and letting not-very-clean water into our basement. Now, however, it was going to be a savior. I lugged the vacuum over and emptied it into the hole. Bye bye water. Problem solved.

A few more vacuumings and luggings later and I got down to the bottom of the lake. Once I did, two thoughts went through my head. The first was “Ah, that spurting water is where the pipe burst.” The second was “Wait a second. They turned off the water, it shouldn’t be spurting!!!!”

Yes, it turns out that the shut off didn’t quite shut off completely. Not only that, but as I called B, our plumber and the water department, I could see all my hard work going up in smoke. (Going down in water?) By the time the water department folks came down to the basement, the pit was about a quarter of the way filled up. The water department guys were having a tough time working through the increasingly murky water so I offered my wet dry vacuum. A couple more guzzle-lug-dumps later and they had a clear working space to open the sewer cap. 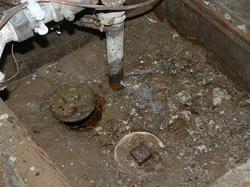 That night, perhaps I should have composed a post or uploaded images, but to be honest I was tired and my back and arm were aching from lugging the wet-dry vacuum. I passed out before 11pm. They’re working on our house today and hopefully there won’t be much tiring work for me to do tonight (though I wouldn’t place money on it the way things have been going), so with luck I’ll be able to do more blog posts later this week instead of having burst-pipus blog-postus interruptus again.