On the day before Father’s Day, we went to the Great Escape. It was a hot day and, though we weren’t going to the water park section, I was looking forward to getting a little drenched at the Raging River ride. While B took JSL to Wiggles World, NHL and I got on line for the Raging River ride. (She took the camera as I obviously couldn’t bring it on this ride… thus the lack of photos.) The line was long, but moved pretty fast. During the ride, I spoke with a woman in front of me (who was there with her three sons) and we eventually got on the ride together.

Now, the basic layout of this ride is a whitewater rapids with a few small waterfalls. There are also water sprayers that can soak you at various intervals. A recent change seems to be that these sprayers are now operated by people who deposit quarters for the honor of soaking riders. Quite the ingenious money making scheme there!

As we got on the ride, the woman I was talking to told her sons that she hoped to get drenched. Well, at the first sprayer, she got her wish. NHL, one of her sons and I all got wet, but she bore the brunt of the cold water. A few twists, turns and splashes later and we emerged having had a soaking good time.

Later in the day (when we were long since dried out), we headed for Desperado Plunge. JSL wanted to go on it with NHL and me but we wisely convinced him not to go. I don’t think he would have enjoyed it and it might have even been dangerous for him to be on it with me.

On this ride, you sit in a log (NHL sat in front of me) and grip a side bar (as there are no seatbelts or safety bars) and go through a few small waterfalls/climbs. Then you get treated to a “serene” scene of loggers cutting up logs before plunging into the water. We had a blast and NHL wanted to go again. This time we were in the front seat of the log with nobody behind us. We also discovered another feature of Desperado Plunge. Remember those sprayers from the Raging River ride? Yeah, they have those here too! Only these are much higher powered and follow you as you round a corner. We went from mildly wet to drenched in about one second’s time! 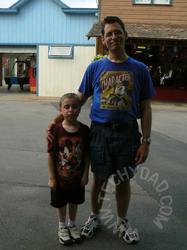 Don’t let NHL’s sour photo face fool you, he loved every second of the ride and would have probably gone on a third or fourth time if offered the opportunity. Just goes to show that you don’t always need to go to the water park to cool down. Of course, now I fear that future Great Escape trips will include B carrying a pocket of quarters and parking the stroller by the sprayer controls to await our passage.