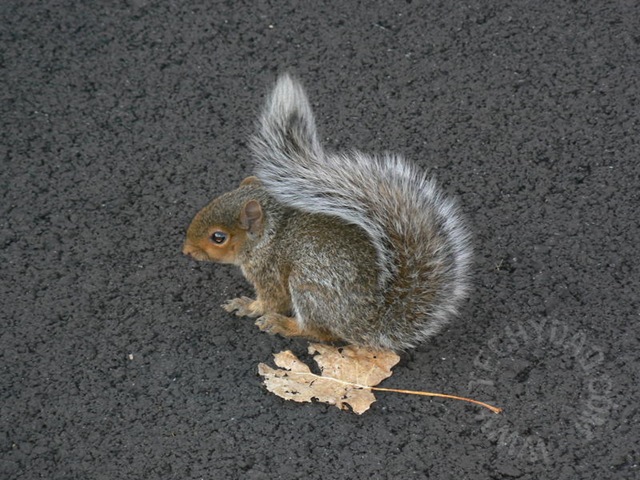 Months ago, NHL began expressing fear that a squirrel would come up to him and bite or scratch him.  I explained to him that squirrels would run away from any people that approached.  Eventually, he understood and his fear went away.

Fast forward to today.  I was going to pick NHL up at Hebrew School, but I was running early.  I decided to go to take some photos for a website I’m working on.  I parked in the parking lot, grabbed my camera and got out of my car.  That’s when I saw the little guy. 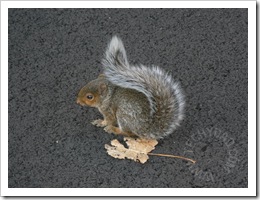 At first, I thought he might be injured.  I approached slowly and took his photo, intending to move on once he ran away.  But he surprised me and ran towards me.  No matter which way I dodged, the little guy would look around for me and hop over to me. 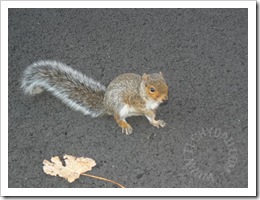 I tried taking a video, but he wouldn’t cooperate – running closer to me than I could shoot.

I tried leading him to a tree in the hopes he’d climb it, but he kept coming back to me.  Eventually, I couldn’t wait any more.  I had to pick up NHL.  But I didn’t want the little guy to run to me and get crushed under my car.  So I ran over to and around a parked car.  As the little squirrel hopped over to find me, I quickly went around, made a beeline for my car and got in.  The last I saw of him, the baby squirrel was peaking out from under the car, looking to see where I went.

I know it was just a squirrel and could have even been sick, but I felt awful.  Almost like I abandoned my own child.  I called the Temple as I picked up my son to see if someone could call Animal Control, but nobody was there.  Maybe it’s the dad in me who hates to see any baby alone.  Maybe it’s the animal lover in me.  Maybe I’m just a big softie.  All I know is that the baby squirrel will haunt me for awhile.

Should I have done something different?  What would you have done?