An Evening With A Mythbuster 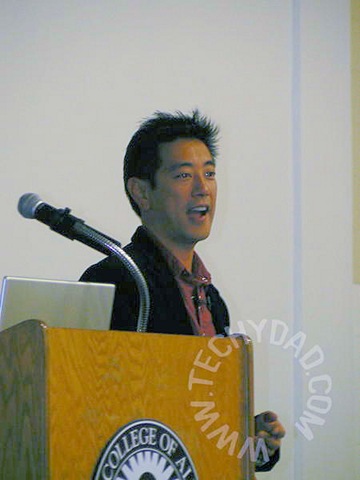 Early this week, via a local blog, I heard that Grant Imahara would be making an appearance.  He would speak for a bit and then have a question and answer session.  I went back and forth about attending considering the time it would be (8PM which would mean B would be putting the kids to bed by herself instead of with my help).  Finally, I decided that it was too good of a chance to pass up.

So on Thursday night, I went home, made a quick dinner for everyone and then got ready.  Just before going, NHL was upset that JSL was playing on his LeapFrog ClickStart computer.  He wanted to play but JSL wasn’t sharing.  To be fair, though, the ClickStart is JSL’s and isn’t really designed for kids NHL’s age.  So I started my computer and let him play some Math Rider (a review of that is coming soon).  Then, I left my computer and math geek-in-training to see a myth-busting geek. 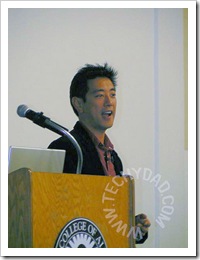 The talk itself was interesting.  He spoke about his movie work and being invited to join Mythbusters.  At the time, he had just finished filming another reality show, Junkyard Wars, and didn’t want to do that again.  Plus, Star Wars 3 was coming up and he really wanted to work on that.  So he turned down the invite and completed working on the Star Wars Prequels.

A few years later, though, he found his movie special effects skills being performed more and more by computers (instead of robotics and models).  Another Mythbusters invite came at just the right time and he hopped aboard.

As I mentioned before, this was going to have a Q & A portion.  I knew that I wanted to ask a question, but didn’t know just what.  I figured he has heard “What’s your favorite myth?” at every talk.  NHL, remembering the duct tape episode, said I should ask “How strong is duct tape?”  (Note to self: This Spring, NHL and I really need to work on a Duct Tape Swing project.)  Finally, I decided and walked up to the mike.

I told him that, as the father of a 7 year old, I use Mythbusters to encourage a love of science in my child.  I mentioned NHL’s duct tape question and Grant mentioned seeing my tweet.  (I suppressed the urge to exclaim “Grant Imahara read my tweet! SQEEEEE!”)  Given how every episode is prefaced with “Don’t Try This At Home” (for obvious safety reasons), I asked if they had ever considered doing a Do Try This At Home special.  Busting some myths or performing some experiments in manners that parents and kids could duplicate in their house.

The first reaction was from the audience.  Everyone applauded.  Then Grant complimented me on the question and said he’s never heard that one before.  He mentioned Kari Byron’s show on the Science Channel, Head Rush, which does feature some “Try It At Home” segments.  (I had set this to DVR but it initially filled up my DVR so I had to remove the recordings.  I’ve reset it to record now that more space was cleared off.)  He said that it was a very good idea, but probably not too likely given that the Mythbusters episodes thrive on things (explosions, gunfire, crashes, etc) that really can’t be done at home. 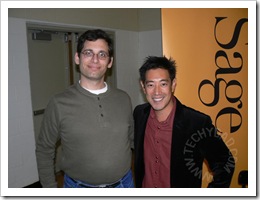 After the Q & A was over, we were given the opportunity to get our picture taken with him and get autographs.  I had him sign my copy of the Mythbusters book: “Don’t Try This At Home.”  (Ironically, this book was published just after he joined the Mythbusters and there’s not a single photo of Grant in it!)  He complimented me on the question and we got our photo taken.

Then it was time to pack up and head back home.  My computer-and-math geek-in-training and my little geek-ling were fast asleep.  I showed B the autograph and the photo of us together.

Thanks, Grant for such an entertaining and informative session.  Here’s hoping that I get to meet Adam, Jamie, Tory and Kari sometime soon!