Ghosts of (Safe) Halloweens Past 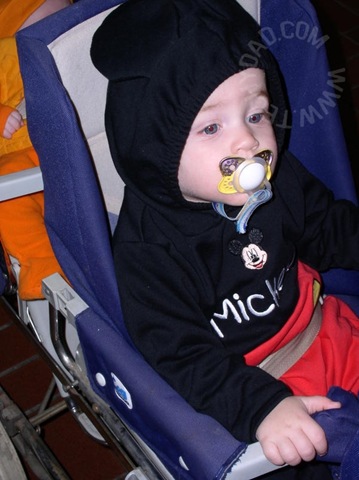 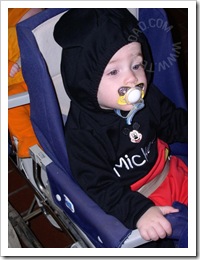 For someone who loves dressing up in costumes, candy and pretty much every other aspect of Halloween, I  don’t have many memories of going trick or treating when I was younger.  I remember being dressed up as a hobo with my mother putting makeup on me (to simulate a dirty face) and I remember coming home with plastic pumpkin buckets full of candy.  After my mother sorted through them (removing anything obviously dangerous), my sister and I were allowed some moderate candy binging.

When I became a father, Halloween was something I looked forward to a lot.  The first year, was a bit of a disappointment.  Obviously, NHL wasn’t going to understand trick or treating, much less why Mom and Dad were putting him in this weird outfit and taking photos. 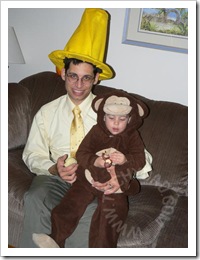 As NHL grew, though, he began to understand.  At daycare, his class would put on a costume parade and I would be right there taking photos.  One year, he dressed as a monkey so I constructed a big yellow hat to go along with it.  It was quite ugly and my “costume” didn’t look anything like Curious George’s Man In The Yellow Hat, actually it looked more like a traffic cone, but I was happy to join in the fun.

I actually missed JSL’s second Halloween (the first one that he would actually understand Trick or Treating) because I attended my friend’s wedding.  Yes, they were married on Halloween and, yes, the reception was a costume ball.  I got to keep my costume, so I’ve dressed as Aragorn from Lord of the Rings for a few years now.

Now that JSL is old enough to understand trick or treating, we expect Halloween to be a very fun night.  Of course, we take measures to ensure that the fun is safe fun.  First of all, they don’t trick or treat without adult supervision.  Secondly, we don’t stray far from known houses.  We’ll trick or treat on my in-law’s block and on our block.  That’s it.  We’ also screen all of their goodies for potential hazards.

Lastly, we go trick or treating before it gets too dark.  This is for many reasons.  If Halloween falls on a school 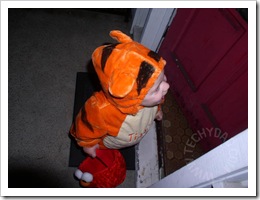 night (like it does this year), we don’t want them dragging the next day because they were out late the previous night.  We also don’t need to worry about reflectors, glo sticks, flashlights and the like.  Plus, it means they get to enjoy some candy before it’s time for bed.  Finally, an early trick or treating means that we both can enjoy our boys trick or treating and still be home in time for other trick or treaters to stop by our house.  (Otherwise, one of us gets to go trick or treating with them and the other has to stay home and man the candy distribution center.)

I wrote this review while participating in a blog campaign by Dad Central Consulting and they sent me a gift card to thank me for taking the time to participate.