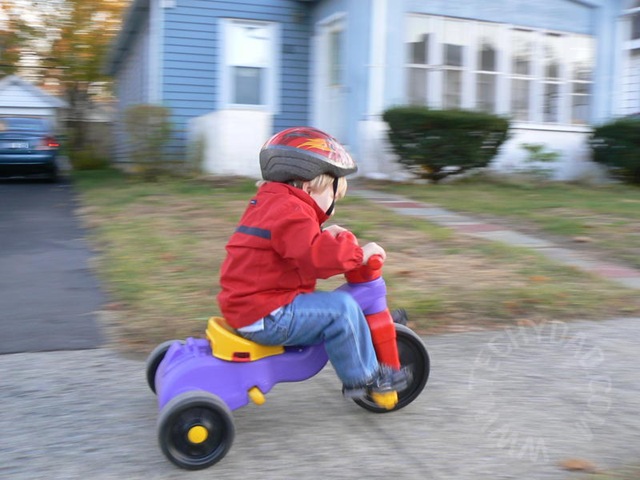 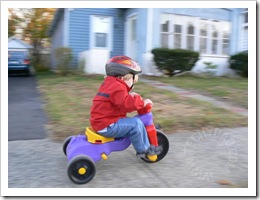 With summer a fast-fading memory and winter’s icy temperatures making a couple of pre-launch appearances, outside play time is getting rarer and rarer.  So, when temperatures the past two days were in the 50’s, we took advantage of this “heat wave” and allowed the kids to play out of doors.

Saturday, we went to B’s parents’ house and, while B and her mother went shopping for B’s birthday present, NHL, JSL and I took to the sidewalks.  JSL had his big wheel bike and NHL had his scooter.  NHL tired of the scooter quickly, as it wound up just slowing him down, and decided to hoof it instead.  He would “race” JSL up and down the block with me trailing not too far behind.

One time, as we reached the end of the block, I stopped and called for them to turn around.  NHL kept going which spurred JSL on to follow him.  I called a second time and then, seeing that they were starting to get close to the main road without signs of stopping, went into a full-on run to catch up.  NHL stopped but it looked like JSL wasn’t going to.  As I screamed for JSL to stop (and as someone crossing the street turned around and looked poised to leap into action), NHL quickly jumped in front of his brother’s bike, grabbed the handlebars and forced it to a stop.  I was so proud of him!  (And, needless to say, I didn’t let JSL get too far from me the rest of the weekend as I don’t think I can trust him to stop when I tell him to.) 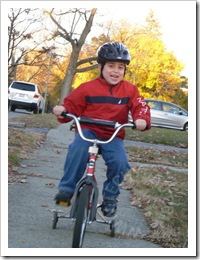 After some play, NHL decided to head indoors to play Nintendo DS.  (B’s father was inside so he was supervised.)  JSL wasn’t ready to go in, so we walked around the block twice.  Well, I walked, JSL biked.  His little feet pushed those pedals up and down with such expertise that you wouldn’t know that he just figured it out this Spring.

On the way, we met a nice lady and her dog.  JSL loves dogs, but hates being around them up close.  It might have to do with a dog that knocked him over once.  We (meaning I) chatted with her for a bit, but soon JSL was feeling the urge to bike again and called on me to hurry it up.

On Sunday, the boys and I went food shopping, letting B get some quiet time to do laundry and write articles  for KidsFunPlaza.  When we got home, B had left to do some more shopping with her mother.  After putting the groceries away, we decided to go outside and do some more bike riding. 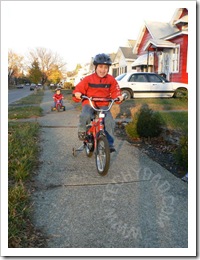 After going up and down the block a couple of times, the boys started to repeat their “too close to the main road” act from the previous day.  This time I was better prepared and stopped them.  NHL said that he wanted to go around the block (usually, he doesn’t want to do this).  I told him that he needed to ask me first before simply biking off towards a main road.  We went around the block two times again. 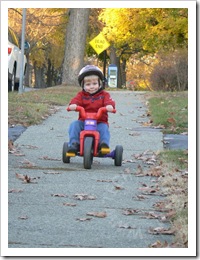 As we hit the halfway mark of the second around-the-block trip, I got notification from B that she was headed home.  The race was on.  Would we make it home first?  Or would B, driven by her parents beat us.  The kids pedaled furiously, driven to increase their speed in the hopes of seeing Nana and Papa.  (Oh.  And Mom too.)  As we rounded the final corner and began to go up our street, I looked back and recognized the car making the turn.  It was a race down our street between a car, a bike, a big wheeler and my two feet.  The car won, followed closely by NHL on his bike.  Trailing behind was a fast pedaling JSL and then, bringing up the rear, was me.

By now, NHL was tired and wanted to go inside, but JSL didn’t want to stop.  So B went inside with NHL and I let JSL pedal up and down the block a couple more times before it was time to head indoors.  Sadly, I don’t think we’ll get to repeat these biking excursions too much longer, but there is hope for the Spring.  It looks like JSL might be able to inherit NHL’s bike (graduating from a big wheeler to a training wheel-enabled two wheeler) and NHL might be able to move into a bigger bike (perhaps without training wheels).  Maybe, if we do this, then B and I can get bikes too and we can all go on family biking trips.  I used to love biking when I was a kid and would love to be able to take the boys and bike around our neighborhood.

P.S.  By the way, that neat “blurred background” effect on the first photo?  Done by following JSL with the camera and matching his speed.  No photo editing programs involved!  I tried that with NHL but didn’t get results as nice as with JSL.  I think that’s because NHL goes faster and so it is harder to match his speed just right.