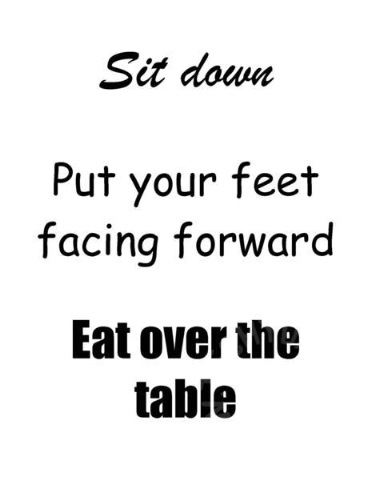 As most parents can attest, parenting can be a repetitive task.  You instruct your children to do something but, when the same situation arises soon afterwards, they don’t remember your instructions.  Instead, you need to repeat yourself.  Over and over again.

Every night for dinner, we go through the same routine.  I serve everyone their food and notice NHL is standing while eating.  He, apparently, hasn’t heard of this remarkable device that’s been invented recently called a chair.  He also doesn’t notice one right next to him.

“Sit down.” I tell him.  So he sits… with his legs pointing to the side.  This means that I can trip over his legs as I walk past and he isn’t facing the table.  The latter means crumbs on the rug.

“Put your feet facing forward,” I say.  So he complies.  Then he picks up a piece of food and eats it right over his lap.  I envision food falling down, missing his plate and the table and hitting his pants, the chair, the rug.

“Eat over the table,” I instruct.  So he does.  Until the next meal when we begin the cycle all over again.

I’ve joked about getting a sign made (and laminated) that I can just hold up.  After all, if I’m going to say the same thing over and over again, I’d like to spare my poor vocal cords.  I’ve even mocked up a sample. 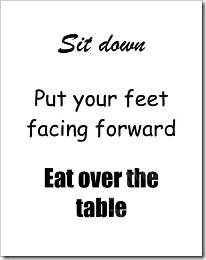 During a Twitter conversation with slpowell, I mentioned this sign idea.  Then, re-reading slpowell’s original tweet that mentioned a “digital voice recorder”, I was struck by inspiration.  Instead of a printed sign (which is bulky and can only say one thing), how about one of those Staples Easy Buttons?  They only cost $5.50 at Staples and I recalled seeing instructions online as to how to hack them.

Of course, those required more work (and purchasing tools such as a Dremel) than I was willing to put into the project.  So I did the next thing that came to mind: Searched the web to see if anyone else was selling these.  Turns out, people are.  Here’s one shop that sells them for under $4.  (Shipping seems to be a flat rate of about $6.50 to me.)

Another intriguing option was this site that sells the buttons with the option of branding them.  As a bonus, this button comes with a strap (which can be used to hang the device in plain sight and yet out of the reach of little hands).  These cost $5 each.

I’m tempted to order a bunch with a “Parent Vocal Saver” logo on them and sell them online.  Would you buy such a device?