It’s Spring, There Are Birds – What Are Those Bees Doing? 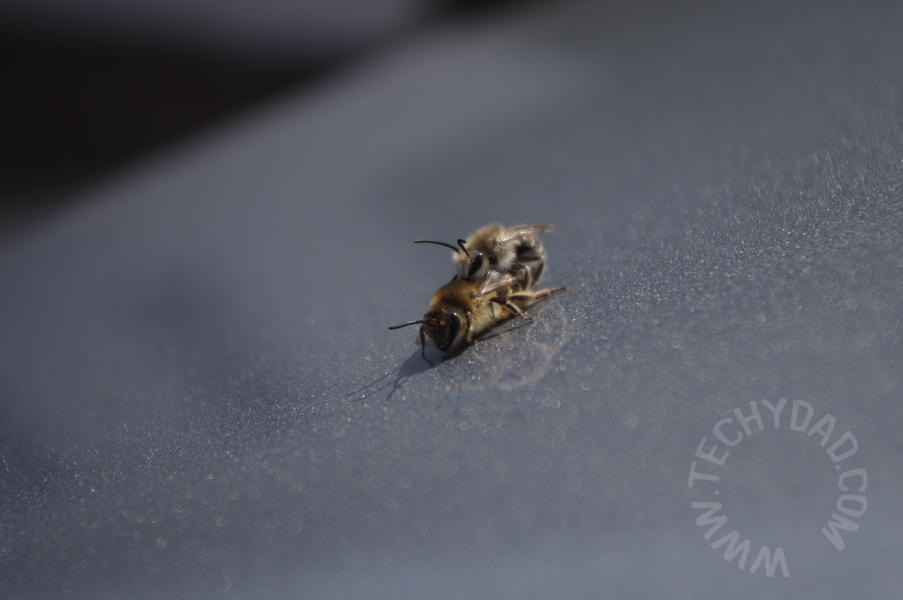 Today, I took the boys to the park for some play time (and also to give B some time by herself to get some writing done).  As we piled into my car, I noticed a bug atop my car.  Nothing odd there.  It’s spring, the weather has gotten warmer and the bugs are out.  I looked closer and noticed it was a bee.  Two bees, in fact.  One atop the other.

The boys were already in the car so my first instinct was to send a TwitPic of the situation.  After that was done, I was going to go in the car and drive off, but then I stopped.  I had my DSLR with me to take photos of the boys at the playground.  Why not put it to a macro test?

So out came my camera and I began snapping away.  I’ve taken bee macro photos before so I know how to do it safely.  I’ve learned that you can get pretty close to bees without bothering them.  They tend to try to fly away from you first.  But if they start buzzing angrily and dive bombing you, it’s time to move away fast.

Anyway, I got as close as I felt I could safely get and let my zoom lens do the rest.  A few clicks of the shutter later and… 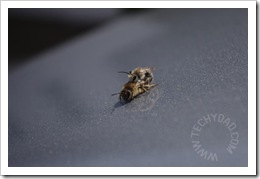 You can click that to magnify the photo, but here’s a cropped version from the full resolution original. 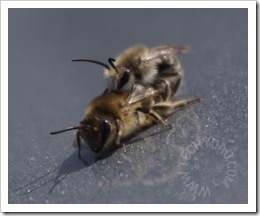 After I was done photographing, I went in the car and started it up.  NHL was curious about what was happening.  I told him that there were some bees up there that wouldn’t be happy that I was moving the car.  He asked why.  I danced around the facts and told him that they were happy with the car where it was and wouldn’t like for it to move.

As we drove off, he said he was sad for the bees because they might get blown off.  I told him that we started slowly and they probably got the hint before we went so fast that they would be blown off.  I really hope that’s the case.  Sorry about the interruption, bees!