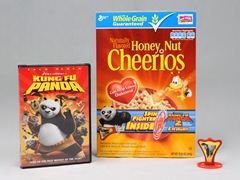 I’m a big fan of animated movies, especially the recent crop of computer generated ones.  With computer animation, you can create fantastic tales that would be impossible to tell otherwise.

When Kung Fu Panda was in theatres, B took NHL and JSL to see it.  Sadly, I did not accompany them (since I was in the office).  When the trailers for Kung Fu Panda 2 came out, I knew I’d have to watch the first before seeing the sequel with my boys.  Luckily, thanks to General Mills, and Dreamworks, I can do just that.

Would you like to win the same prize pack?  Well, luckily for you, I’m giving away another Kung Fu Panda 2 prize pack (courtesy of General Mills and Dreamworks) with a Kung Fu Panda DVD, spinner and a box of cereal.  (The cereal can be Cocoa Puffs®, Trix®, Golden Grahams®, Reese’s Puffs®, Cheerios®, Apple Cinnamon Cheerios®, Cookie Crisp®, Lucky Charms®, Cinnamon Toast Crunch or Honey Nut Cheerios.)  To enter, simply leave a comment below answering this question: Who would you take with you to see Kung Fu Panda 2?

You can also earn bonus entries by doing any (or all) of the following items. Just be sure to leave a separate comment for each item that you complete.  (Don’t just leave one comment listing everything you did.)

To enter, please follow the rules above within the comment section. Contest starts today, June 2nd and ends at Noon EST on June 16th, 2011. You do not have to be a blogger to enter, but must leave a valid e-mail address for me to contact you for mailing address once the giveaway is over. I will select the winner using random.org and contact you via e-mail. You will have 48 hours to claim the prize. If there is no response, another winner will be selected. Open to U.S. residents only.

Disclaimer: The products were provided for this review by General Mills and Dreamworks as part of a MyBlogSpark campaign.  The opinions expressed above are my own.