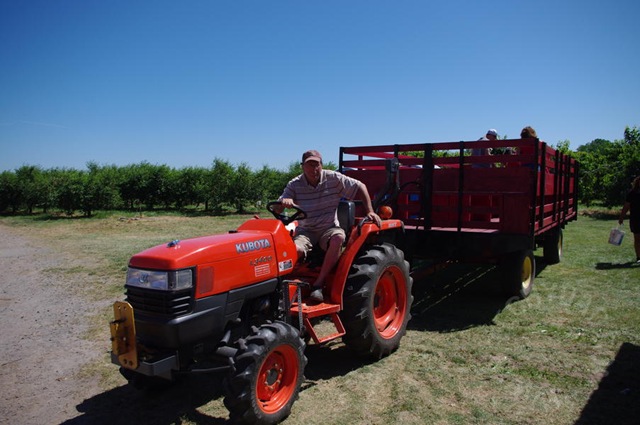 Three years ago, on a visit to B’s brother, we decided to go cherry picking.  While I love picking fruits and vegetables, I’ll admit that I was skeptical.  After all, I don’t like cherries.  Never have.

Still, I went and had a blast.  We picked a ton of cherries.  One great thing about cherry picking was that the trees were so short that we could easily reach the top branches and NHL (then 4) could easily reach the bottom branches.  Meanwhile, JSL and Cousin S (then 1 and almost-1 respectfully) sat in their strollers holding hands.  We collected 22 pounds of cherries.  Enough for everyone to split and feast.  I wound up trying a few and, for the first time ever, found that I loved cherries.  Especially the rainier variety which tastes like peaches.

Last year, we went with B’s brother, his wife, Cousin S, and B’s parents.  Between all of us, we collected 33 pounds.

So how did we do when we went cherry picking yesterday?

We arrived at the cherry fields, got some buckets and hopped on the wagon. 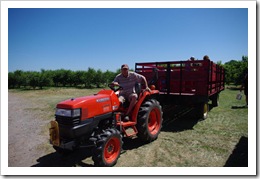 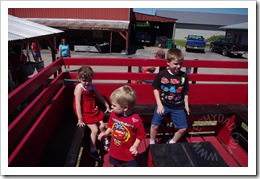 We could have walked, but the kids loved this.  It was like a ride before the cherry picking fun.  Once we got off the wagon, we headed to the trees. 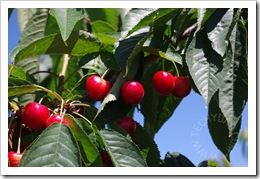 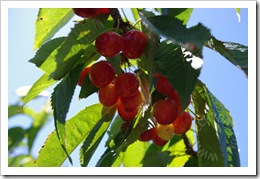 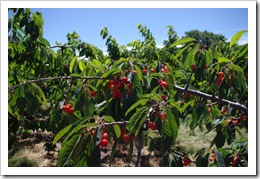 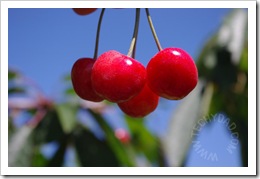 As you can see, there were cherries everywhere.  We immediately got to picking.  NHL went on a quest to find the perfect cherry.  Meanwhile, JSL and Cousin S formed a team to work together.  Cousin B just was happy having room to move and big buckets to try to tip over.  (He didn’t manage to, but he was having a blast once we let him loose.) 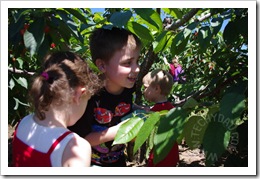 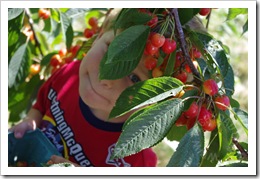 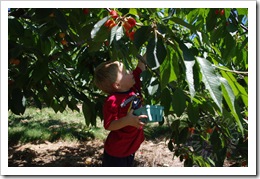 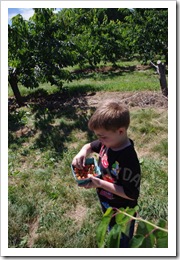 One big challenge was keeping them from eating too many cherries.  Ok, let’s admit it… We ate a lot of cherries too.  They were just too tasty!  Still, most of the cherries wound up in the buckets until they were filled. 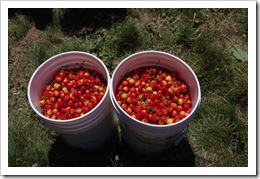 So how many cherries was this? 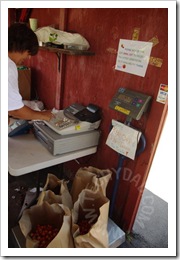 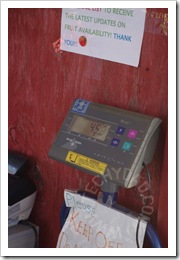 Yup, we picked 45.2 pounds of cherries.  Even after we split it with B’s brother, give some to B’s parents and perhaps to some others, that’s a LOT of cherries to eat.  Luckily, they’re healthy as well as tasty.

Hmm…. I wonder if there are any cherry peppermint recipes.