Splash Party at the Spray Grounds 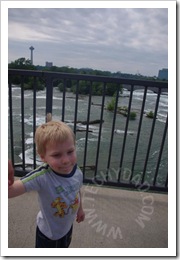 Yesterday, B wanted to go see a friend for a quick meet-up and dinner.  I was more than happy to watch the boys.  Before she left, though, we settled on what I would do with the boys.  A local park recently paved over their pool and installed a great splash ground.  No, you couldn’t go swimming there anymore, but kids (and grown-ups) could run through the water without fear of anyone drowning.

There was only one problem in this plan: JSL didn’t want to get his face wet.  Now, JSL has no real fear of water.  When it’s raining out and we’re running to the car trying to stay as dry as possible, JSL inevitably declares “I don’t mind. I LIKE getting wet!”

Of course, when Niagara Falls sprayed us all with a fine mist, he cowered into me complaining about the soaking spray.  Where “soaking spray” = “just got us slightly wet enough that we dried off three seconds after the spray ended.”  I’ve gotten wetter running through a light drizzle.

I came up with a plan, though.  We went to Target for a few things and we decided to buy the boys a few pool toys to use at the spray grounds (or for when we set up our kiddie pool).  I asked JSL if he’d feel braver with some new toys.  He hesitated.  I added to the pot by volunteering to go into the spray grounds with him.  He smiled and decided that he would be brave with a new toy and daddy along for the soaking wet ride. 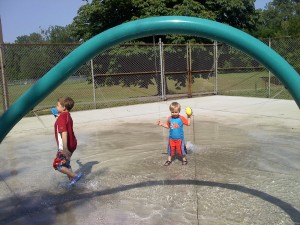 Once we got home, we geared up, got suntan lotion applied and went to the spray grounds.  Once we set up shop (aka put JSL’s stroller with our gear in a nice, dry location), I got one of the toys out and the boys tentatively entered the water.

NHL quickly took to the environment, though he was afraid of going under the water sprayers.  When he was young, he dragged me under much worse sprayers at Sesame Place but has since gotten hesitant of them.  JSL, wasn’t sure about entering the water at all.  I walked in and coaxed him in as well.

It was a beautiful Sunday afternoon, so the spray grounds was hopping that day.  I’ll admit that I wanted to take my camera with me to take pictures except that 1) I was afraid of my camera getting wet and 2) I was afraid of looking like a weirdo taking photos where kids were in bathing suits.  So I just took a single photo with my camera phone, framing the shot so it’d be clear that only my kids were in the photo.

The boys quickly make a bunch of new friends.  Kids would come up to them and ask to play with them… or maybe it was the cool new toys (a beach ball, soft “frisbee”, water football and 2 water balls).  Either way, they all had fun tossing the items and then running after them.  I even got into the fun throwing (or chasing after) items.

Lest you think it was only me playing with kids, though, I had some grown-up interactions also.  I spoke with quite a few moms who were there with their kids.  It was wonderful talking with them and seeing the various kids interacting.

Some fun moments (in no particular order):

Before long, it was time to leave.  Leaving, however, turned out to be not so easy to do.  I first told them it was time to leave at about 4:15.  Then, I relented and gave them until 4:30.  Then, I got to talking with a mom about some stuff and realized it was 4:35.  So I said we’d stay until 4:45.  At 4:50, NHL was still complaining about leaving, so I told him we could stay for 5 more minutes if he stayed under the water sprayers (the rain-like ones mentioned above) for 5 seconds.  He did it so we stayed.

Finally, it was at 5pm and we really had to leave.  They still protested so I told them we could do one more run-through the rain-sprayers.  We said ready-set-go and off we went.  We came back dripping wet and laughing.  We headed for home, but not before I promised the boys that we could come back again soon.  Maybe next time B will join us and take photos or, even better, join us in the water!