My Weekend With The Boys While TheAngelForever Was At #SheStreams, Part 1 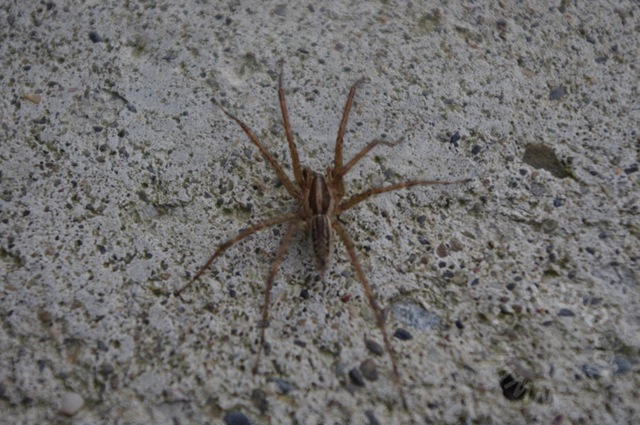 On Friday, we all woke up early and took B to the train station.  She was off to SheStreams and my weekend with the boys had begun.  Ok, technically speaking, it wouldn’t begin for quite a few hours more.  First, I needed to drop NHL off at school, drop JSL off at school, go to work, work a lot, come back from work to B’s parents’ house to pick up the boys (they picked them up from school) and then bring them home… THEN our all-boys weekend began.

The weekend started pretty uneventfully.  After a quick dinner, I gave the boys each a big brownie that I had brought home for them.  NHL devoured his, but JSL didn’t want his.  He was acting funny and I asked him if he was tired.  He said he was so I wrapped his brownie for later and got the boys ready for bed.  JSL fell asleep almost as soon as his head hit the pillow.

The next morning, I slept late.  In this house, this means that I slept until 7:30am.  At about 7:45am, I was trying to justify staying in bed longer when the doorbell rang.  I quickly tossed on some pants and a shirt (no answering the door in my PJs) and went to the door.  Nobody was there.  But there was a package there for B.  I took that as a sign to get up and get moving.

Our main restriction for Saturday was that I celebrate Shabbat.  Mainly, this meant I wouldn’t drive them anywhere.  It’s kind of hard to go out and do things when you’re limited to walking distance only.  (At least it is where we live.)  That was ok, though.  I noticed that the living room could use a good cleaning.  Then, NHL asked to watch Roku and we couldn’t find the remote.  That was the final straw.  Off I went on a cleaning bender.  I tried to get the boys to help, but quickly gave up on this.  (Though JSL came back from time to time to help until he tired of the task.)  Toys got put away, papers got stacked neatly.  The couch was even moved to dispose of hidden dust bunnies (and retrieve lost toys).  Oh, and I found the Roku remote hidden under the couch cushions.

As my cleaning wound down, and after we ate lunch, I decided we should go for a walk.  NHL resisted (of course).  He demanded that we should stay in the house watching TV.  (Because, apparently, half a day spent in your PJs watching TV and playing Nintendo DS isn’t enough quality time with your electronic buddies.)  I offered that we could walk to B’s parents’ house.  (Yes, they’re within walking distance.  A bit far, perhaps, but doable.)  He relented and agreed to go.

Only then did it dawn on me: What if they were out?  Another Shabbat restriction is that I won’t use the phone.  So I couldn’t call them to see if they were there.  For all I knew, we could walk all the way over there only to have to head all the way back when we found out they were out shopping.  I asked NHL if he wanted to call B’s parents and he jumped at the chance.

I talked him through how to use the phone and he called them up.  It was around here that I lost control of the situation.  Nobody was really dressed yet and I figured we’d walk over together.  Suddenly, the doorbell rang.  Again, I rushed to put on some presentable clothes.  At the door this time was B’s father, ready to drive us over.  Apparently, NHL told him that they wanted to come over RIGHT NOW and have dinner there.  B’s father saw we weren’t ready to leave yet and left to go to the mall with B’s mother for a couple of hours. 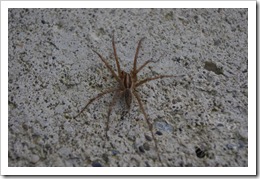 After he left, we all got clothes on and headed outside.  After a quick run-in with a big spider (wonder what kind this was), we I got the boys’ helmets on and they had some biking fun.

A month or so ago, I’d removed NHL’s training wheels and he still doesn’t know how to balance properly, so I spent the time holding him steady.  Supporting him if he leaned over, guiding him to a slow, safe fall if he leaned too far, and trying to remind him to keep his mind on riding the bike and not singing various songs while biking.  Meanwhile, JSL was on his big wheel burning rubber…. or plastic as the case may be. 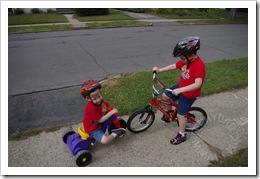 After some biking, the boys and I decided to play something else.  Out came the balls for some soccer fun.  (Where “soccer” really means “kicking the ball aimlessly up and down the block without any clearly defined goals in mind.”) 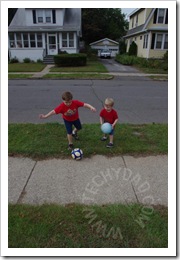 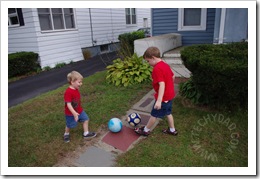 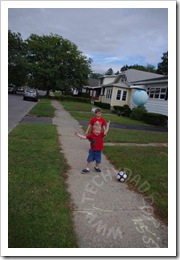 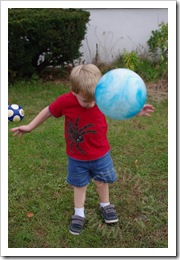 Finally, it was time to go to B’s parents’ house (driven by B’s parents).  There, the boys played and we had dinner (pizza).  As the day ended, B’s father drove us back home and I got them into bed.  Our boys’ day together was at an end.  The next day, would bring more fun and picking B up, but that story will need to wait for tomorrow.