My Weekend With The Boys While TheAngelForever Was At #SheStreams, Part 2 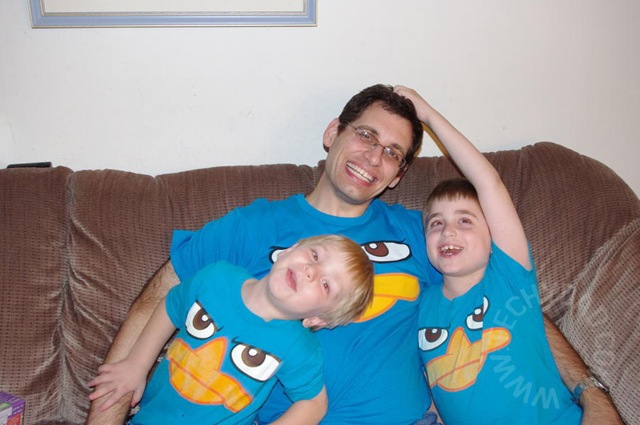 I woke up on Sunday morning to the sound of a kid out of bed.  This is a usual affair.  NHL will wake up at 6am and ask if he can watch TV.  When I opened my eyes, though, I saw two kids looking at me.  JSL was out of bed also.  I approved them going to watch TV on the couch and tried to get some more sleep. 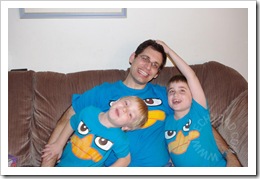 Dropping NHL off at Hebrew school, I found out just how many people were Phineas and Ferb fans.  As we walked up the steps, NHL in front and JSL and I behind, I heard someone singing “doo-bee-doo-bee-doo-wa”.  They had spotted NHL’s shirt and were expressing approval.  Then, as JSL and I came into view, they stopped.  Their appreciation was quite apparent.  For the record, these weren’t kids.  These were adults.  To rephrase my statement above: I found out just how many parents in our temple are Phineas and Ferb fans!

After NHL was in Hebrew school, JSL and I did some grocery shopping.  Then we picked NHL back up, stopped by the house because I had forgotten my camera (bad camera geek!), and headed to lunch.

My first thought for lunch was Cici’s.  However, eating pizza the night before had soured me on the thought of an all-you-can-eat pizza lunch.  Instead, we went to Moe’s Southwest Grill.  There, the boys each had a Mini Masterpiece (kids cheese quesadilla).  I opted out of my usual Homewrecker (beans, seasoned rice, shredded cheese, pico de gallo, lettuce, sour cream, tofu and guacamole on a whole wheat tortilla), deciding instead to get an Art Vandalay.  This burrito has everything that the Homewrecker has except for the tofu and is $1 cheaper.

While they were making mine, they asked if I wanted grilled veggies.  That sounded good so in went grilled onions, peppers and mushrooms.  When it came time to roll it up, the guy somehow succeeded.  I have no clue how they do this.  If I were rolling that burrito, the tortilla would rip, toppings would leak out of all sides, and the burrito wouldn’t be able to be closed.  It’d be a mess.  A delicious mess, but still a mess.

This guy somehow fit all of those toppings into a rolled up tortilla that by all rights shouldn’t have been able to hold them all.  The end result was so delicious that the Art Vandalay with grilled veggies has now replaced the Homewrecker as my new favorite Moe’s burrito.

After lunch, I figured that the boys needed some time running around.  So to the park we went.  First up, was the hedge maze.  This is a favorite of the boys.  They run around hiding from each other (and from me) and having a blast.  I tried taking photos of them, but was only partially successful.  They were just too busy having a good time to wait for dad’s camera. 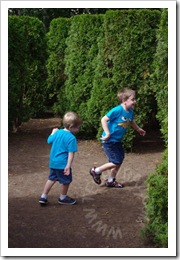 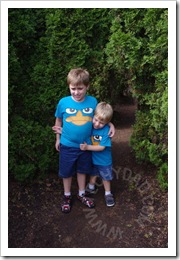 With the hedge maze run through (multiple times), it was time for the boys to tackle the playground.  JSL and NHL had fun on the slides, swings, and various other fun activities. 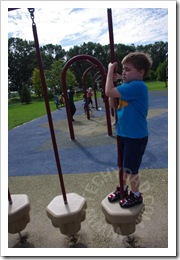 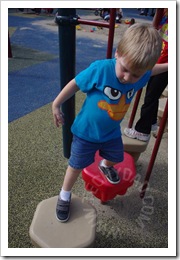 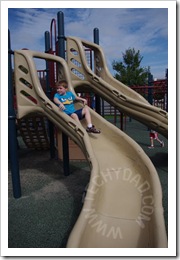 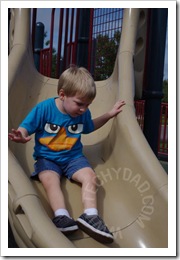 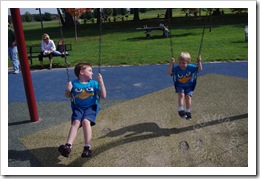 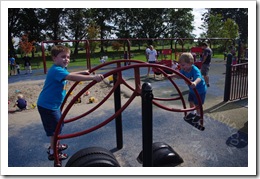 A favorite of theirs was the telephone.  There is a hollow pipe which winds under the playground to two separate locations.  Through either end, you can talk and be heard on the other side.  At first, NHL and JSL spoke to each other.  Then, as NHL lost interest and went on to other activities, JSL found himself talking to other kids.  He would chat for a short while and then shout “I’m coming over to see you!”  At this point, he’d dart as fast as his little legs could take him across the playground to say hi to his new friend.

I noticed that our time was running low, so I herded the boys to the lake.  There were ducks, fish, geese, and even remote controlled boats. 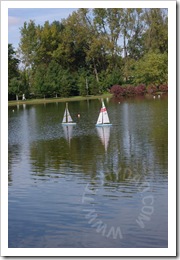 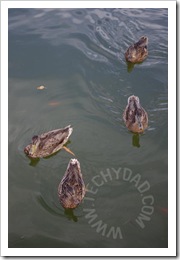 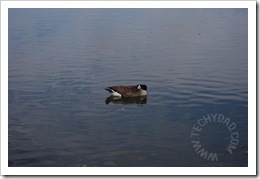 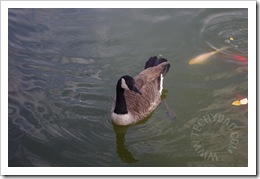 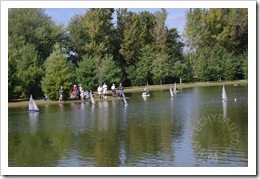 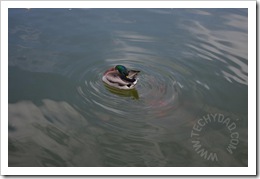 Before long, our dad and kids time was coming to an end.  We had to go get B from the train station.  Reluctantly, we left the park and went to the train station (stopping by briefly to buy an iced tea for B since she texted that she was thirsty).

Despite my worrying that we’d get there late, we arrived with plenty of time to spare.  The boys got busy looking around in wonder at the train tracks below.  We spotted a train pull up and then pull back.  NHL worried that the train was leaving without dropping B off.  I reassured him that B’s train wouldn’t leave her behind.  Sure enough, B’s train (a different one than the one we saw earlier) pulled in a few minutes later. 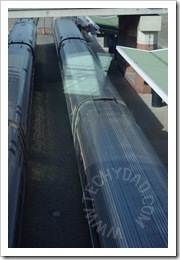 We looked as people came out and suddenly I saw a familiar figure.  B was back! 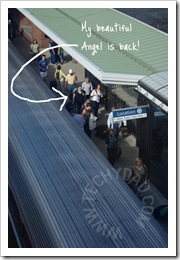 The boys ran up and hugged B and off we went back home.

I want to thank the folks from SheStreams for taking such good care of my wonderful wife.  You tired her out, but in a good way.  She returned with lots of new ideas and excited about her blogging future.  Best of all, from the kids’ point of view, she brought back gifts!