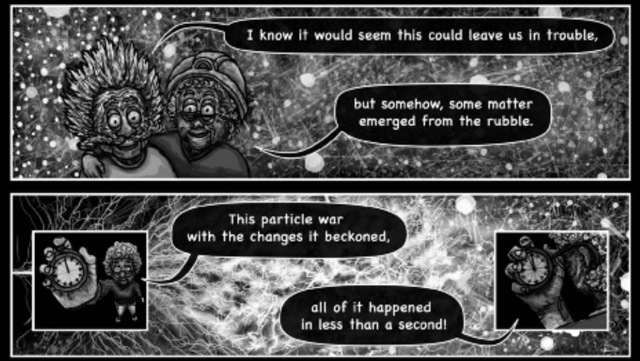 I love science.  NHL does too.  So when I heard about James Lu Dunbar and his The Universe Verse series, I just had to check out his work.  I’ve heard it compared to a mixture of Carl Sagan and Dr. Seuss.  This is a very apt comparison. 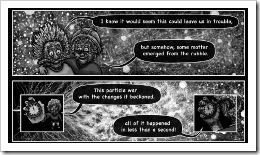 I read the first of the series, Bang!, to NHL and JSL.  The book starts out before the Big Bang.  They describe the tiny speck that the Universe began as and then the tremendous explosion of the Big Bang.  The book covers energy cooling into matter, the formation of the basic forces (such as gravity) that dictate how matter behaves.  It goes on to describe the first atoms, how they gathered together into stars and finally how some of those stars became supernovas. 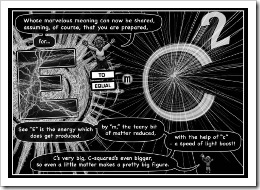 All along the way, the narration rhymes in a manner that would make the Cat in the Hat proud minus made up words.  All of the weird looking words here are actually scientific terms and are used validly.  This is a book that could be used by high school physics students.  It really takes difficult to understand terms and simplifies them without losing any of the wonder of it all.

Of course, considering the weighty subject matter, reading this to a 4 year old and an 8 year old was a risky proposition.  JSL was a bit bored by it, but I didn’t really think he’d enjoy it.  Honestly, the only reason he listened in was because NHL and I were reading it and he didn’t want to be left out.

NHL, my science geek-in-training, loved it.  He definitely didn’t understood all of the physics that was described, but I really didn’t think he would.  What he did understand, though, was that this was an extremely entertaining story of how the Universe was formed.

The second book in the series is called “It’s Alive!”  After a quick rehash of how the Universe was formed, condensed to a mere 3 pages, the book discusses planet formation, the beginnings of life, Evolution, biology, DNA, the food chain and more.  Unlike the first book, this one is in full color.  (Bang! was in black and white.)

I initially planned on reading this to NHL, but changed my mind.  My concern wasn’t about him not liking the book, but for brief references to sex.  Mind you, these are done within the context of evolution and genes combining.  There is absolutely titillating about the presentation. Still, the word was there and I didn’t want my 8 year old asking questions I wasn’t ready to answer just yet.  Here’s the panel in question.  I’ll leave it up to you whether or not you’d show this to a third grader. 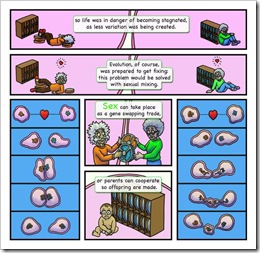 There’s still one book that hasn’t been released yet.  After reading the first two, I eagerly await James’ final book of the trilogy.  Reading his blog, it appears that this will cover (in part), agriculture and civilization forming.  If the quality of the third book is as good as the first two, this will be one set that every classroom should have.

The two currently released books in the Universe Verse series can be purchased for $12.95 for the first book and $15.95 for the second.  You can also e-mail him and he’ll send you the PDFs for free.  These will definitely be eBooks that I’ll keep and go over with NHL and JSL as they get older.  I’ll even re-read them myself just for the pure fun of it.

Disclaimer: I received the first two books for free as PDFs, however, as mentioned above, anyone can do this.  No review was required and all opinions expressed above are my own.