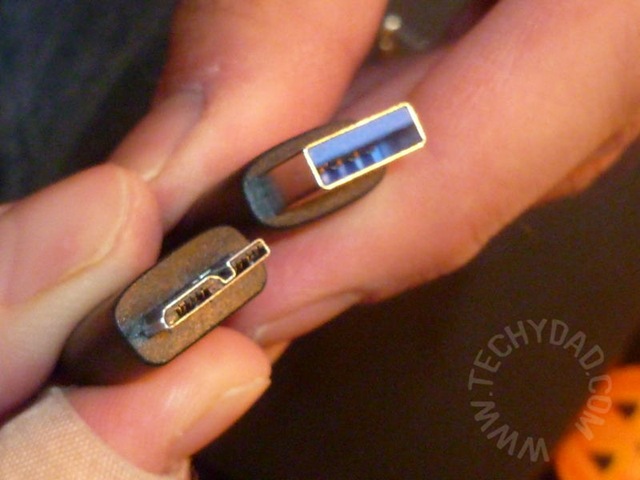 My father-in-law and mother-in-law recently found themselves in need of a backup solution.  (The driver for this was an iPad which needed to be backed up and low hard drive space.  That full story will come another day.)  My preferred backup solution is an extra hard drive.  They are easy to store and work with and can be hooked up to any computer.  So we went out and helped my father-in-law buy a 1TB external hard drive.  We got back to his house, plugged it in, and I talked him through backing up his files.

At this point, I just want to step aside and say that I got a bad feeling about this drive from the moment we unboxed it.  No, it wasn’t banged up or anything.  Instead, I looked at the USB cord and saw this. 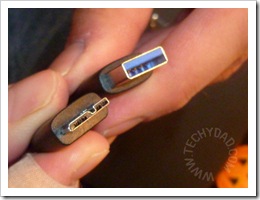 Notice the indentation on the cord?  That’s not a standard cord.  With the external hard drives I have, if I lose the cord I could use any standard cord (of the same type) and access my data.  If my father-in-law lost this cord, or if it went bad, then he’d have to hope the hard drive manufacturer would sell him a new one.  And that it wouldn’t be too costly.  Otherwise, he’d be SOL.

Putting aside my concerns, though, we proceeded with the backup.  Everything was working fine until we got to a few of the last files.  Then the computer reported having trouble writing the files.  My Computer reported that the drive simply wasn’t there.  We checked all of the plugs, both in the computer and in the drive.  Nothing.  We tried plugging it into B’s computer.  Nada.  Less than two hours after opening the box and the drive was effectively dead.

Before the drive died, it copied files.  We didn’t want to simply return the drive, with my father-in-law’s files on it.  Neither, however, could we erase those files prior to returning it.  Had the cord been a non-proprietary one, I could have swapped out a different cord.  This would have at least narrowed down the problem to the drive or cord.  Instead, we’re at the mercy of the hard drive manufacturer’s support to figure out what’s wrong and figure out how we can delete our data prior to returning it.

Tomorrow, I’ll post Part 2 where I discuss the frustrations of retrieving data from an iPad.