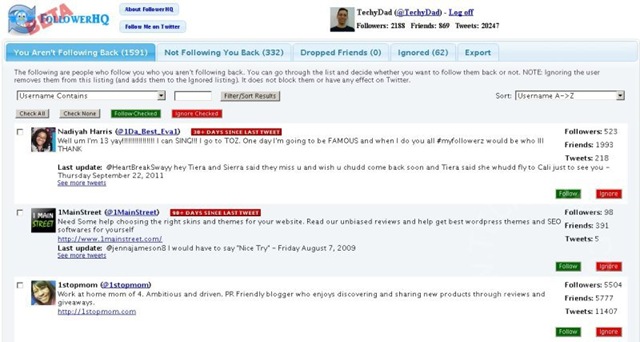 For quite awhile, I’ve teased on Twitter that I was working on a big Twitter application.  I didn’t reveal the name except to a select group of beta testers.  Well, today that “select group” is widening.  Today, FollowerHQ launches.

First, some history.  As I gained followers on Twitter, I would get e-mails that Twitter would send to me letting me know about my new follows.  Some people decide to automatically follow back, but I’m not of the opinion that this is useful.  I tend to be more selective in who’s tweets appear in my timeline.  So I would open up each e-mail, open up the link to the person’s profile page, examine the last few tweets as well as the person’s information, decide whether or not to follow the person, and then move on to the next person.  This was fine when I’d get 20 new followers in a week.

Unfortunately for this process, though, I began getting more and more people following me.  It became more and more of a pain to manage these new followers and I fell further and further behind.  Of course, the more people I needed to go through, the less I wanted to spend the time pouring through page after page.  I wondered if there was an easier way.  Being a programmer, I decided to build an easier way.

FollowerHQ will, after you authorize it, check who is following you.  It will compare this list to the people you are following.  You will then see 4 tabs: You Aren’t Following Back, Not Following You Back, Dropped Friends, and Ignored.  There is also a fifth tab called Export.

In each tab (except for Export), you can search and sort through the listings.  You can even take actions on multiple users at once.  For example, if you spot a bunch of spam bots following you, simply check them all and click the “Ignore Checked” button.  They will all be moved to the Ignore queue.

For now, FollowerHQ will be free.  I’m not going to rule out setting up some pricing scheme in the future.  Should FollowerHQ become popular and/or require more time and effort to maintain, I would need to offset the time/money spent on it, of course.  (Let’s face it, I’m *hoping* this becomes popular.)  However, even if there is some sort of payment plan in the future, I’ll always keep a free version around.

Enough talking, though.  It’s time for everyone to go play with FollowerHQ.  In case you haven’t already guessed, you can find it here: http://www.FollowerHQ.com/.  I’ve also registered the @FollowerHQ Twitter account.

Enjoy and let me know what you think of it in the comments below!