A Big Waste of Food 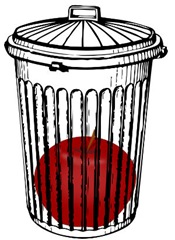 This show was a competition.  Two teams of chefs (Bobby Flay and Michael Symon versus Anne Burrell and Alex Guarnaschell) were competing to see who could make the best dishes for an audience.  So far, this sounds like many of the other competitions that Food Network has aired.  This show had a very interesting twist, though.  The competitors could only use food that would otherwise have been discarded.  Yes, they were essentially cooking with garbage.

Initially, you might wrinkle your nose in disgust.  You may picture Bobby Flay emerging from a dumpster with a half eaten pizza slice, discussing how – after he brushed off the flies – he would turn it into a wonderful appetizer.  It was nothing like this, however.

You see, Americans are very spoiled when it comes to food.  When we shop for tomatoes, we want the very best.  An otherwise edible tomato with a crack in its skin is tossed aside.  Peaches with blemishes on them are left on the ground to rot.  Lettuce is ignored because it isn’t picture-perfect.

It isn’t just the vegetables and fruits, either. Meats that aren’t the ever-desired center cuts are cast out.  Chickens with a broken wing are thrown away because people might think it means they are diseased (when the truth is that they are perfectly fine to eat).  Bagels left at the end of the day and pre-packaged foods with creeping expiration dates get the garbage bag treatment.

As the contestants gathered food, the amazement at their finds increased.  So did the disgust.  Perfectly good food was being thrown away every day.  While 1 in 4 children go to bed hungry, while people scrounge around wondering where their next meal will come from, mountains of food are being tossed in the trash.  The food recovered by the contestants was a mere drop in the bucket.

This show got me thinking about food waste by me.  I am not innocent of passing over produce because of minor blemishes.  I also wondered what my local grocery stores, bakeries, and other food shops did with their waste.  If the food is still good, albeit blemished or slightly older than customers tend to like, does the store toss it away?  Or do they donate it to a local food pantry/shelter/etc?

Thanks to this program, I plan on calling some local companies to see how they handle their food waste.  If they don’t donate it, I’m going to see if I can arrange for at least some of it to be donated.  I encourage everyone to do the same with companies in their area.

Have you seen the Food Network special?  How do you think you can help raise awareness about food waste?

Disclaimer: I wasn’t compensated in any way by Food Network for this post.  I simply wanted to share what I felt was a good program and an important issue.  The image above was created using two images from OpenClipArt.org.