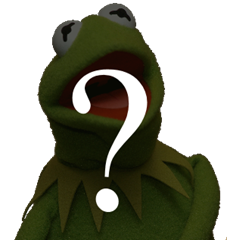 Being that we’re Jewish, I thought that we’d be mostly immune from having to deal with "Daddy is X real" kind of questions.  Since we don’t celebrate Christmas or Easter, Santa Claus and the Easter Bunny are moot points.  We’re honest about the existence of these (though we encourage our kids not to burst the bubbles of other kids who believe).  They even know that characters from most of the shows they watch (e.g. Spider-Man, Optimus Prime) are fictional.  Sure, there’s the issue of the Tooth Fairy, but I figured that was it.

Imagine my shock, then, when NHL, JSL and I were watching a Muppet Show DVD and NHL asked me: "Dad, are the Muppets real?"  I was completely caught off-guard.  The realist in me wanted to say "No, they are pieces of fabric that people shove their hands into."   Meanwhile, the Disney lover in me wanted to say "Yes, they are.  Kermit and Miss Piggy live in a house just outside of Hollywood, California" so that he would hold onto the magic just a little bit more.

This came up again when we went to see The Laurie Berkner Band perform at Proctors Theatre in Schenectady.  They asked me if Laurie Berkner was real.  When I said she was, they didn’t believe me.  They were convinced that Laurie was some made-up character from Jack’s Big Music Show.  When an actual person showed up on stage, they couldn’t believe it.  (It surprised me as they’ve seen TV kids singers on stage before.  Namely, the Wiggles.)

It should be interesting as they discover what is real and what isn’t.  I just hope that they realize that there can still be magic in characters even if they don’t really exist as you see them on the screen.

What do you tell your kids about the reality of fictional characters?