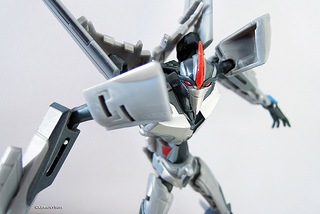 As all parents do, I’ve tried to teach my boys right from wrong.  Of course, there are times when doing the wrong thing results in an immediate reward for the person while doing the right things results in a near-term penalty.  Young kids, being short-term thinkers, can often take the wrong path due to the short-term gain, even while knowing that it is the wrong thing to do.

To help NHL with handling this concept, I decided to introduce him to the concept of Karma.  Karma, as I explained to NHL, is the concept that good things happen to those who do good deeds and bad things happen to people who do bad things.  (Karma dates back to ancient India, but for NHL’s purposes, I relied on the modern interpretation.)  NHL seemed to understand as we ran through a few scenarios describing what would be the right and wrong thing to do.

A week or so after we spoke about it, NHL, JSL, and I were watching Transformers: Prime.  We’ve come to really like this incarnation of Transfomers and look forward to each new episode.  This two-parter, Operation Bumblebee, saw Bumblebee lose his T-Cog.  For those who didn’t watch, a T-Cog is the biomechanical organ that lets Cybertronians scan vehicles and transform.  So when MECH, a group of humans trying to make their own Transformers, knock out Bumblebee and take his T-Cog, Bumblebee finds that he can’t transform anymore.  Since transformation is so integral to what they are and since Bumblebee enjoys driving fast in his vehicle mode, this makes him feel useless to his team.

Back to Starscream, though.  We first see him arriving on the scene after Bumblebee was knocked out by MECH.  (They had both been tracking the same signal that MECH used in their trap.)  Starscream’s reaction wasn’t to help Bumblebee, but to muse "Better him than me."

After this, he follows MECH back to their headquarters and proposes an alliance.  The alliance goes well enough until Bumblebee tracks them down and tries to retrieve his T-Cog.  MECH’s troops prove no match for Bumblebee despite the robot being unable to use his weapons.  (No T-Cog means no transforming his arms into guns.)  As MECH retreats, its leader tells Starscream to bring the T-Cog.  Starscream grabs it.  He describes Bumblebee as pathetic and a failure for being unable to transform into vehicle mode.  When it looks like Bumblebee will get his T-Cog back, Starscream shoots it.  He leaves Bumblebee with one final taunt: "Time to jet.. because I can!"  (Note to non-geeks: Starscream’s vehicle mode is a jet.)

Of course, MECH isn’t happy with Starscream for losing the T-Cog.  When Starscream says they can get one soon enough from another Autobot, they zap Starscream and take his.

I intended to use this episode as a lesson in bullying.  I described to NHL how Starscream took advantage of Bumblebee’s weakness, helped the people who hurt him, and taunted him to make him feel bad about himself.  (Of course, schoolyard bullying rarely involves blasters.)

NHL, however, dredged up the Karma talk from a few weeks back and pointed out that it applied here.  Impressed, I admitted that he was right.  Starscream could have done the right thing by helping Bumblebee (either right away or after he tracked down MECH’s headquarters).  Previous episodes have established that he can contact the Autobots (when he was in need of medical assistance).  His actions throughout the episode were one bad action after another, right down to shooting the T-Cog to spite Bumblebee.

For his bad actions, something bad happened to him: He lost his own T-Cog.  His description of Bumblebee as a pathetic failure who couldn’t achieve vehicle mode became him as he scampered away by foot.

I was extremely proud of NHL for remembering our lesson and for applying it so perfectly.

Disclaimer: The image of Starscream above is from Clement Soh‘s Flickr stream and is shared via a Creative Commons license.