A Quick But Tasty Charoset Mix 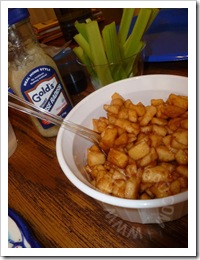 One of the traditional dishes to make during a Passover Seder is Charoset.  This dish of wine, apples, and cinnamon is often eaten with matzoh and horseradish or just by itself.

The first step is to peel and chop the apples.  Usually, we take out the food processor to chop the apples.  This time, though, we didn’t feel like having to clean it up after making the Charoset.  After all, we had just cleaned the house and were preparing an entire Seder meal.  Any cleanup cut-backs were greatly appreciated. 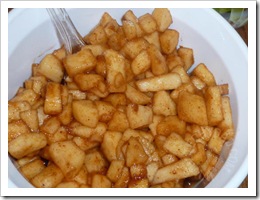 After B peeled and chopped the apples, she put them in a bowl with some wine.  Then, she mixed in some honey, white sugar, and cinnamon.  We had a recipe that we were loosely basing this on, but we didn’t measure out the proportions.  We simply tasted the dish after adding the ingredients and added in whatever we thought it needed.  For example, the recipe calls for 1/2 teaspoon of cinnamon, but I know we added much, much more.  (NOTE:  You’ll notice the recipe I linked to calls for walnuts.  B’s allergic so we obviously didn’t use them.  If allergies aren’t a concern, by all means add some in.)

After the mixture was done, we covered it and placed it in the fridge for a few hours to marinate.  Then, we served it at the Seder.  Everyone, including JSL and NHL, loved it.  The only reason we have leftovers was because we had made such a big batch.  It definitely won’t go to waste though.