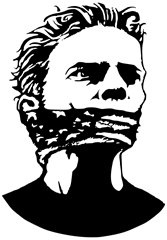 Yesterday, an article came to my attention.  It would seem that two New York State legislators, Assemblyman Jim Conte and Senator Thomas O’Mara came out with a bill that they claimed would fight cyberbullying.  How did it intend to do this?  Simple: Anonymous speech would be banned from the Internet.  Problem solved and two thumbs up, right?  After all, I’m a big opponent of bullying and a big fan of stopping bullying.  But before we schedule the parade in their honor, perhaps we should look a little closer at the bill, it’s unintended consequences, and some possibly intended side effects.

The bill wouldn’t exactly prohibit someone from posting something anonymously.  Instead, sites that allowed anonymous comments (and that includes sites that use pseudonyms… you know, like "TechyDad") would be required to clearly post a phone number or e-mail address where people could demand anonymous comments be removed.  If a comment complaint is received, the site owner would then need to verify the anonymous commenter’s name, home address, and IP Address.  The commenter would be forced to choose: Reveal their real name to the world or have the comment be taken down.  (If you want to read the exact text of the bill, it is right here.)

Right away, problems arise.  First of all, there is no requirement on the complainer to reveal their real name to the world.  So this becomes a sort of "heckler’s veto."  Anyone that doesn’t like someone’s comment, someone’s opinion on an issue, or even just doesn’t like someone for any reason whatsoever would be able to submit a takedown notice without revealing who they were.

Secondly, there is no guide as to which comments are vulnerable to takedown requests.  In fact, the bill explicitly states that site operators must "upon request shall remove any comments posted on his or her web site by an anonymous poster."  So any comment would be at risk.  If someone didn’t like where a debate on a site was veering, they could request takedown of the opposing argument’s comments.  Or, perhaps, if someone took a dislike to a blogger, they could demand that they take down every comment unless they first verified each person’s home address.

That home address verification is the third item.  Exactly how would one do this?  Take your typical WordPress blog, like this one, as an example.  To comment here, you need to type in a name.  Not your real name, mind you.  It could be a pseudonym, "Anonymous", a nickname, a completely made up name, or anything that enters into your head.  You could also enter an e-mail address (which doesn’t display on posts but is saved in the database) and a URL, but these aren’t required.  In addition, all commenters automatically have their IP Address recorded.

Let’s assume that I’m requiring and verifying commenters’ e-mail addresses.  Now, someone tells me to remove the comment from "ProThisTopic12345."  I e-mail them and they e-mail back that their name is "Herman Jones" and they live at "26 Mockin’ Byrd Street" in the town of "Munsey, NY."  How do I know they’re telling me the truth?  I could look them up in an online phone listing, but what if they are unlisted.  Would I need to pay a service to verify names/addresses for me?  And what if it is valid?  How do I know that "ProThisTopic12345" really *IS* "Herman Jones"?  Maybe Herman is the commenter’s neighbor or co-worker.

The reaction to this would be the removal of online comment abilities in New York.  Of course, the Internet is bigger than just New York.  How would this law apply to someone whose site is hosted in New Jersey with the site administrator living in Connecticut?  Even if the commenter was in New York, the person complaining would have a tough time getting the comment removed.  All this would do would be to negatively impact New York businesses and free speech.

And there’s the final nail in this bill’s coffin.  Freedom of Speech.  The First Amendment states (in part) that "Congress shall make no law … abridging the freedom of speech."  Though it states "Congress", the courts have repeatedly held that this applies to state governments also.  This bill would definitely have a chilling effect on free speech.

One can’t even argue that free speech doesn’t include anonymous speech.  The United States has a rich history of anonymous speech.  When the debate was raging as to whether or not to ratify the United States Constitution, a series of essays were published supporting it.  These essays, collectively known as The Federalist Papers, were published anonymously.  (Though later on it was figured out that they were penned by Alexander Hamilton, James Madison, and John Jay.)  If anonymous speech was good enough for the Founding Fathers, how could we declare it to be wrong?

If this bill is so wrong, then why pass it?  It was billed as fighting cyberbullying, but somehow I doubt that it would combat that effectively.  Wired states that this bill would combat cyberbullying and "baseless political attacks."  Perhaps that last item is the real reason.  Right now, anyone can post an attack on a politician and the politician can’t prevent this.  Some politicians, with an inflated sense of personal power and a thin skin, might have decided that they needed to pass a law to protect themselves from these citizens.  Of course, a "protect us from the people" law would never fly, so they tacked on "cyberbullying" to fool people who want to stop bullying.

Don’t be fooled.  This is a horrible bill that would be impossible to enforce, at best, and would chill online speech, at worst.  With luck, it will die without ever being passed.  Still, there’s no reason to sit around waiting for it to die on its own.  If you are a New York State resident, you should contact your state representatives to let them know about this bill and why you oppose it.  If you don’t live in New York, make sure your state legislators know that you value your right to free speech online.

Disclaimer: The "Freedom of Speech" image above comes from OpenClipArt.org.