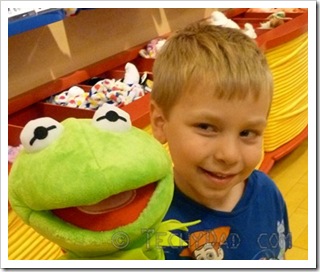 Yesterday, NHL asked me which Muppet I like best.  I thought for a second and answered Fozzie Bear.  However, after giving it a little more thought, I’m torn.  Though I still like Fozzie, I think I might feel a certain kinship with Kermit the Frog.

Kermit did the best he could keeping everything running smoothly, but you could tell that there were times when he felt like every problem he solved came gift-wrapped with three more to tackle.  His arm flailing "Yaayyyy" when introducing a guest might have been a bit of stress relief lest his froggy mind snap and have him flailing his arms while screaming out the back door.

The other Muppets would look to Kermit for advice.  If anything went wrong, they’d turn to Kermit as though he had the answers.  He did his best, but it was obvious that most times he was just making things up as he went along.

After all was said and done, he could have given up.  He could have left the Muppets behind and retired to the swamp where his only worry was catching flies.  He didn’t, though.  He kept coming back week after week, putting himself through more and more stress because he saw that the finished product was worth all of that stress and so much more.

Like Kermit’s Muppet Show, my household can feel like barely contained chaos at times.  There are times when it seems as though B and I can’t look away for three seconds without the boys arguing over something trivial.  ("That’s *MY* spot on the couch!" "*I* wanted to play with that toy!"  "No, we’re going to play *this* now.")  Even if the boys aren’t at each other’s throats, there seems to be a list a mile long of things I need to do.  Every one thing I complete seems to lead to seven more to add to the list.  Often people will look to me for advice.  They’ll assume that I know all the answers.  Sometimes I do, but more often than not I feel like I’m making it up as I go along.

I’ll admit that there are days when I realize that it would be easier to run out the door screaming, but I never do that.  Why?  Because no matter how stressful it is, no matter how many fights, no matter how tired I am from trudging through my To Do list,  no matter how much winging it I need to do, it’s all worth it.  My boys and my wife are worth all of this stress and so much more.  So I grit my teeth and shoulder the tough times so I can treasure those all-too-rare moments when the chaos subsides and it all falls into place beautifully.