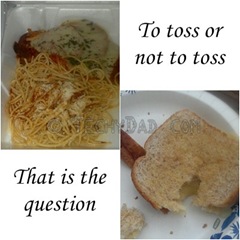 On Saturday night, we went out to dinner.  It was pretty much an uneventful dinner and my eggplant parmesan tasted pretty good.  It was a big portion, however, so I decided to save half for another day.  At the time, I figured I was being frugal.  The cost of the one dinner would pay for two meals.

The curve ball came after the kids were in bed.  My stomach began cramping bad and… well, let’s just say other "symptoms" manifested which I won’t go into here to keep this from going TMI.  B told me that obviously we were going to toss out my leftover eggplant.  Even while in the midst of my possible food poisoning, the frugal part of my brain protested.  "It might not be the eggplant," it reasoned.  "It’s a shame to waste the food," it declared.

No, I’m not going to eat it.  Yes, I’m going to toss it.  Yes, I understand that I’m better off tossing the food than risking another bout of whatever-that-was.  That frugal part of my brain is still protesting that I’m contributing an awful crime of food waste by doing so, though.

The next day, for dinner, I made the boys grilled cheese sandwiches.  This is usually a safe bet, especially with picky JSL.  Grilled cheese holds a place of honor on his all-too-short list of foods that he will eat.  I even let him pick the cheese: provolone, or as he calls it "circle cheese."

I made the grilled cheese, put it by his spot (along with a sandwich for his brother), and called the boys over.  NHL ate his and asked for another (which he ate).  JSL protested.  This wasn’t what he wanted!  The cheese doesn’t taste good!  It’s the wrong color!  We spent the next hour with him pleading for "something else" and with us telling him that he couldn’t ask for one thing and then decide, after it was cooked, that he really wanted something else.

He never did eat his grilled cheese and so, as I write this the night before this post goes live, it sits here destined for the garbage.  Even though I’m full and even with my weakened stomach, that frugal part of my brain is trying to convince me to eat his sandwich so it doesn’t go to waste.

Do you feel guilty when you throw out food?