On Sunday, I laid my patient down on the operating table and, having planned the procedure out, began opening him up.  No, I didn’t just switch day jobs to become a surgeon.  I was trying to fix my laptop.

You see, for the past few weeks, I’ve been having problems with my laptop charging.  I’d plug it in only to have it not recognize that it was plugged in.  I would need to wiggle my laptop around, changing positions until it finally realized that it didn’t need to run from battery.  One day, I illuminated the laptop’s power plug with a flashlight while gently pressing on said plug with a piece of plastic.  The plug wiggled like a child’s tooth that was getting ready to pop out.  I figured this was the problem, so I steeled myself for some laptop surgery to repair it.

Now, I may be "techy", but I’ve never done anything like this.  I’ve built my own desktop computers, but that’s easy.  This was a *LAPTOP* computer.  Completely different, right?  Super hard to get into, right?

Turns out, it isn’t that hard.  Luckily, HP had all of the instructions on their website.

The first step was to remove the battery.  This is very important.  Not only can’t you reach certain screws with the battery in, but you don’t want any chance of electricity coursing through the patient’s veins… I mean circuits while you’re handling his electronic guts.  That would be bad for both doctor and patient! 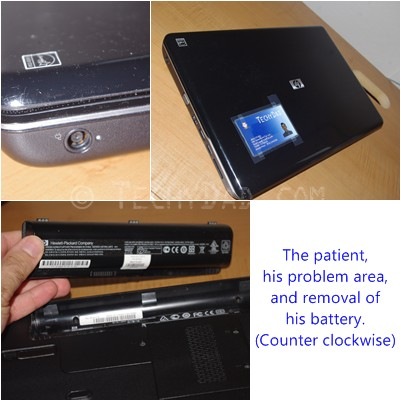 After this, I took apart the patient bit by bit.  Optical drive, hard drive, WLAN card, keyboard, and even the screen came off. 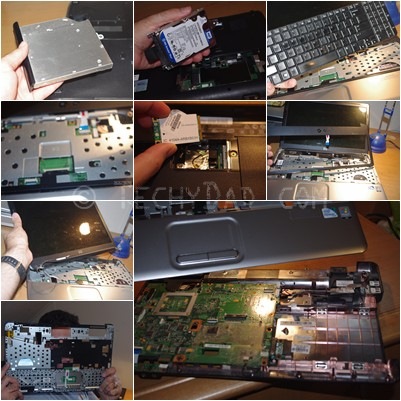 Soon, I was left with just a bare circuit board on a base. 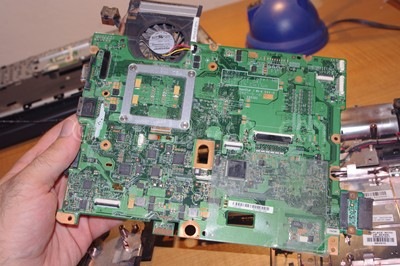 A quick look revealed the problem.  The plug is supposed to sit between two metal plates which hold it in place.  However one plate was cracked.  I fashioned a quick "sling" out of duct tape, but Google searches revealed that duct tape can melt inside the hot environs of a laptop.  Obviously, that would be bad for the patient, so I asked for a second opinion and got a recommendation of electrical tape.  Leaving the patient on the operating table, JSL and I ran over to Home Depot.  They confirmed that electrical tape will lose adhesion, but not melt.  One purchase later and my laptop was taped up. 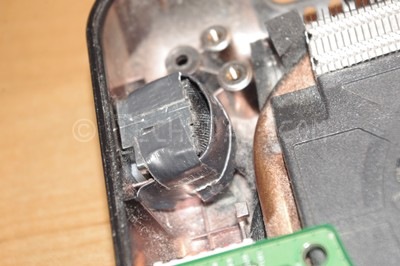 Now, I just needed to put it back together without losing any pieces.

Here’s a hint: If you ever do this, be very careful of EVERY SINGLE PIECE YOU TOUCH.  You never know when you might turn over a piece, hear *clink* *clink* and then realize that you didn’t take one of the tiny screws out of that piece.  And once you hear the *click* *clink*, that screw is lost forever.  Luckily, I was able to transplant a screw from another part to replace the missing screw.  (That area had 3 screws holding it in place.  I think it can make due with 2 instead.)

Finally, my laptop was back together.  But was the patient well? 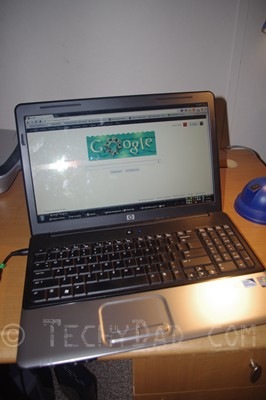 The patient survived!  There were cheers all around, but I realized we weren’t out of the woods yet.  I had to try plugging in the patient.  Thankfully, this worked beautifully.  The patient was quickly recharging and gaining (battery) strength.

However, in many surgeries, there are often complications after the surgery is over and done with.  In this case, the patient began exhibiting the same weird "not charging" behavior after being sent home (aka being taken downstairs to the couch).  But it would charge some times.

I was about the deem the surgery a failure when I noticed that the power cord worked when it was bent at a certain angle.  Straighten it out and it didn’t work at all.  (Carefully bending/unbending while keeping the plug still eliminated the possibility of the laptop itself being the cause.)  So there was a secondary issue at play.

For now, I’m prescribing keeping the cord bent until a suitable replacement can be purchased.  In the meantime, this was a very valuable learning experience.  Even the techiest of us have to do things for the first time.  When you haven’t done something before, it can seem impossible and scary.  But if you plan it out and are very careful, you might just surprise yourself with what you can do!