TechyDad vs. The Wasps 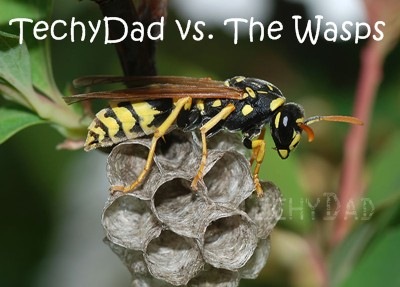 I’m a pretty easy going person when it comes to animals around my house.  When a rabbit was munching my plants a few years back, I insisted on getting a non-toxic spray to ward it off.  I don’t even mind bees.  In fact, I love taking photos of them close up.  However, when a group of wasps think that my house would make a perfect nesting spot, I go all out.

My War On Wasps started on Saturday night.  The wasps had constructed their nest by the highest point of the side of my house under an overhang.  Having procured some wasp spray, I took my position a safe distance under their nest and sprayed it.  The wasps definitely didn’t like being poisoned and I retreated back into the house.  The next night, I sprayed them with some more, but found that I had been a bit overzealous the first night.  My spray ran out with hardly any hitting the nest.

Monday, we acquired some more anti-wasp spray.  This touted a 27 foot spray reach.  Out I went again, to attack them, but this time my weapon backfired.  As I sprayed upward, I saw the plume of spray widen and turn into a cloud.  The cloud then drifted toward me as I was barely able to jump out of the way.  I tried again, but with the same results.  I conceded this night’s battle before I got a face full of poison.

The next night, I decided to try another tactic.  These are paper wasps so perhaps their nest would be vulnerable to water.  My hose has a very impressive range when on the most concentrated setting.  Perhaps I could flood them out.  After dark, when wasps tend to be the least active, I snuck out, set up my hose, and sprayed the nest.  Some wasps staggered out, apparently unsure of what was going on.  A few fell.  But the nest held.

I had had enough.  I couldn’t spray them while they were up high, so I resolved to take the nest down by any means.  Last night was going to be the final battle.  I took out my roof rake – usually used to remove snow from my roof during the winter – and assembled it outside.  Then I grabbed the spray and headed to the nest.  Once I was in position, I used the roof rake to knock it down and sprayed like crazy.

Hopefully, this will prevent the wasps from returning.  I might be kind to creatures in general, but when it comes to an insect that could possibly sting my child, I go to war.

Disclaimer: The wasp photo above is from Alvesgaspar and comes from Wikipedia.