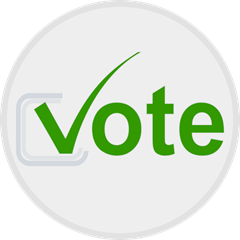 Today is the culmination of two years of campaigning, primaries, TV ads, debates, and endless polling.  It’s time to vote.  Across the country, people will decide who will be our next President.  They’ll also decide on Senators, Representatives, and various state and local races.  Some people will even have ballot initiatives where they’ll have a direct say in the path their state takes.

In some countries, the citizens don’t get to vote.  In others, "voting" means saying "Yes, I will select the ruling party’s chosen candidate because I don’t want my house burned down."  In these places, opposition candidates are arrested under trumped up charges and/or disappear under mysterious circumstances.

We’re lucky.  We live in a country where we get a choice.  It may not be a perfect choice, but it’s a choice.  And, even if our chosen candidate doesn’t get elected, we have a chance to vote for someone else in four years.

NOTE: The "Vote icon" above is by netalloy and is available from OpenClipArt.org.

NOTE #2: To my international readers: If you live in a country where you’re allowed to vote, please take this as a call to vote when your voting day rolls around.