NHL recently had to complete a "persuasive essay" project for school.  He needed to write a paper to convince someone of something.  The topic he decided on was pets and why we should get him one.  Here’s his essay (and yes, I got his approval to share it here): 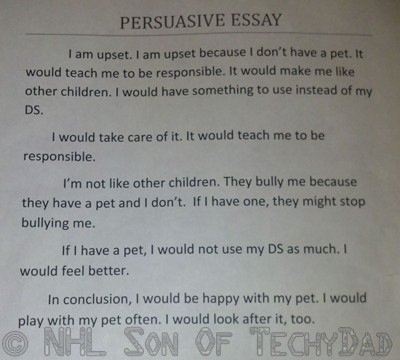 Of course, before he even showed this essay to me, he mentioned what he was writing about and I gave him our arguments against getting a pet.

Our first argument is simply that B is allergic to most dogs and cats.  That limits our pet options considerably.  Secondly, pets cost a lot of money to take care of.  Food, medical care, housing, and/or toys for the pet don’t come cheap.  When your budget looks like ours, taking on another expense for a pet isn’t a big option.  Finally, pets require space to live in.  This isn’t as big of a problem if the pet is a goldfish in a small bowl, but our house is so small and so tightly packed that even that would be a problem.  (Seriously.  We have that little room.)

Having seen NHL’s essay, I’d also argue that there are other ways he can learn to be responsible and not use his Nintendo DS as much.  He could read some books, play with the many toys he has and put them away when he’s done, and even volunteer to clean up areas of the house.

Finally, and most importantly, I talked to NHL about people who might try to bully him because they have pets and he doesn’t.  I let him know that bullies try to define what is "good" and what isn’t.  They are trying to define having a pet as "good" and not having one as "bad."  However, they have no right to define what is good and bad in his life.  If he doesn’t have a pet, that’s just fine.  He can’t live his life by doing things only because doing said things might get some people to stop picking on him.  Getting a pet just so some kids will stop bullying him is a poor reason to get a pet.

In the end, it was an admirable attempt by NHL, but he’ll need to try harder in order to convince us that we should get him a pet.