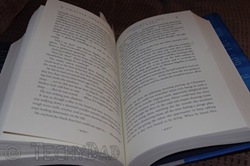 As I wrote before, I’ve been reading the Harry Potter series with NHL.  As we’ve progressed, his enthusiasm seems to have waned.  He still enjoys it when we read and wants to know what happens to Harry and his friends, but it seems as though his anxieties are being triggered.

In Prisoner of Azkaban, he didn’t like the werewolves and cringed upon seeing them in film form.  In the Order of the Phoenix, his problem is with a certain new teacher at Hogwarts and spy for the Ministry of Magic: Dolores Umbridge.

Without giving out any spoilers (in case you haven’t read the book or seen the movie), Umbridge is a big supporter of the Minister of Magic.  (Think of the magical world’s equivalent of a President.)  He is of the opinion that the headmaster of Hogwarts, Dumbledore, and Harry Potter are lying about a big threat to everyone.  He dispatches Umbridge there to spy on them and keep the situation in hand.

Dolores Umbridge quickly reveals that she is not interested in debate about subjects.  Things are to be done her way and, if she is crossed, she will make life hard for the people responsible.

In the movie, Umbridge is played by Imelda Staunton and looks like a sweet aunt (at least until she acts or speaks).  In the book, however, she is described as looking like a toad stuffed into a pink cardigan.

Whether it is due to the description of Umbridge’s looks or her cruelty (especially to Harry), it has NHL spooked.  Until he feels comfortable enough to move on, our reading of Harry Potter has stalled.  I, however, am going to forge ahead alone.  I’ve already finished Order of the Phoenix and plan on starting Half-Blood Prince soon.