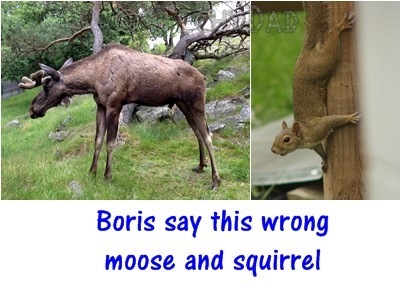 One of the fun parts about being a parent is introducing your kids to shows that you grew up with.  I’ve shown my boys Spiderman and his Amazing Friends, Rugrats, , Animaniacs, and even Teenage Mutant Ninja Turtles (via the new series since the 80’s series isn’t available to stream).

Their latest retro streaming obsession, however, is Rocky and Bullwinkle.  I t began with me playing a few Fractured Fairy Tales for NHL.  He wasn’t enthusiastic about seeing it, at first.  I guess he assumed that "show dad used to watch when he was a kid" would equal "boring."  (No matter how many shows they come to like that I introduce them to, they always seem to assume this.)  After seeing the first one, however, NHL begged to see another and another.  Soon, he was showing them to his brother and they were laughing at the fairy tales gone wrong.

Then, they discovered Moose and Squirrel.  NHL is now obsessive about seeing every episode.  He got really upset when, after returning from a quick supermarket run with me, he saw JSL watching an episode he hadn’t seen.  It looks like another win for Shows Dad Loved Watching.

Note: The moose image above is by Seeman and the squirrel is by helicopterjeff.  Both images are available via MorgueFile.com.