Superheroes, The Sun, and (Because) Saturn! 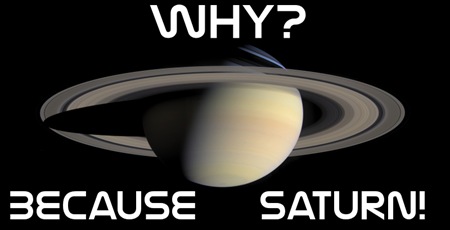 I had three things I wanted to post about, but none of them seemed long enough for a post on their own.  So here they are together in a mish mash of superheroes, science, space, and social media!

First comes a bit of Geek Fail on my part.  Recently, Cartoon Network released a large amount of their library on Netflix.  As I drooled over the shows that I could share with my boys, I saw "The Powerpuff Girls."  I laughed at it and, on a lark, decided to show them the show so we could laugh at it together.  Never underestimate a geek’s love of superheroes, though.  While I couldn’t take the show seriously enough to enjoy it, my kids loved it!  Now NHL is determined to watch every episode.  Geek Fail?  Or perhaps Geek Win in that NHL loves superheroes so much that he even likes PowerPuff Girls.

Next up comes a little video that NASA put together.  You see, NASA launched the Solar Dynamics Observatory three years ago.  Since then, it’s been regularly taking photos of the Sun.  One photo every twelve seconds.  For three years.  It’s given scientists tons of data to prove and disprove theories about our favorite star.  NASA has taken those photos and strung them together into an amazing four minute video showing some amazing details.

Thanks to NASA images and videos being public domain for the most part (about the only ones that aren’t are items with the NASA logo or with people in the shot), you can download high resolution movies or still shots from this movie.

A couple of days ago, Phil Plait (aka BadAstronomer) and Jenny Lawson (aka The Bloggess) started conversing on Twitter.  Phil was tweeting a drive to press Congress not to cut planetary science at NASA.  This is a very good cause on its own.

Then, Jenny pointed out how "Because, Saturn!" was a good answer to anything.

Jenny mentioned putting this on a shirt.  While I haven’t done that, I did come up with this nice looking graphic.

That image comes from NASA via the Cassini space probe.  They stitched together 126 individual photos to come up with this 40 megapixel beauty.  Of course, you can and should go to NASA’s website to look up some of their other wonderful photos.

NASA makes getting great science and amazing images from millions of miles away look easy.  So please click the link above to press Congress to give NASA funding for planetary science efforts.  Why? Because, Saturn!