Asperger’s and the Emotional Cage 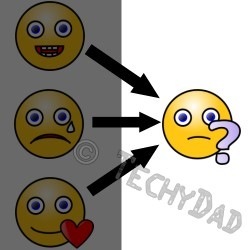 Having Asperger’s Syndrome can be challenging in a lot of ways.  Many of them involve dealing with the neurotypical world and its strange (to those on the spectrum) ways and rules.  Things that neurotypical individuals take for granted can be mysterious for us Aspies.  A big challenge I’ve recently realized can be the expression of emotions.

Some people will look at those with Asperger’s and mistakenly think that we don’t have emotions or that said emotions are less than our neurotypical counterparts – at least until said emotions explode out.  These people are horribly, horribly wrong.  If anything, people with Asperger’s feel emotions more deeply.  I’ll often find myself hurt about something for days while the other person has forgotten about the incident ten minutes later.  The trouble is that Aspies often find themselves unable to express those emotions.

An observer on the other side of the glass might mistake the lack of small movements/sounds for a lack of emotions – until the Aspie makes big movements or big sounds that get through the sound-proof glass.  The neurotypical observers are surprised but the Aspie is frustrated.  It’s like living in an emotional cage.

Personally, I’ve recognized this tendency with me since before I heard about Asperger’s Syndrome.  My go-to method for conflict resolution is keeping quiet.  I’ve always done this because I’m afraid of becoming so upset that I shout something that I don’t really mean.  I’ve found that NHL – who is obviously less adept at expressing his emotions having had less time to practice – is prone to this.  He’ll get upset over an issue (say, being made to go on a family walk when he just wants to play video games) and will shout things like “I hate you” and “I’m going to kick you” instead of calmly discussing his feelings.

Outbursts aside, however, I’ll often plan out arguments in my head.  I’ll lay out reasons why I feel a particular way, what the person did to make me feel this way, and the resolution I’m looking for.  The arguments are all there in my head, but when they come out of my mouth they get garbled and are less than persuasive.  It’s like being able to imagine a perfect drawing in your head but only being able to draw a stick figure – and a poor one at that.

It’s not just my own emotions that I have trouble with but expressing empathy for others’ emotions.  Plenty of times, B will have something going wrong, she’ll look to me for sympathy, and will find none.  That’s not because I have no sympathy for her.  I do, but I just don’t have the words to express it.  I’m standing behind that tinted-glass cage screaming how I feel but all that comes out is a muffled “sorry.”  I’m frustrated because I can’t express how I feel and B’s frustrated that I’m not showing sympathy for her situation.

Interestingly enough, I feel much more at home expressing emotions in writing.  There’s no immediate pressure to put the perfect words to my feelings.  I can write, delete, and rewrite how I feel before sending it on to the recipient.  It’s no wonder that I feel more at home in the online world than in the “real” world and that I feel more social on social media than when face to face.

All in all, having Asperger’s can be frustrating to all involved when it comes to expression of emotions.  Aspies can easily be misunderstood and thought of as having no real emotions when the opposite is true.  We Aspies feel deeply but just can’t find the words to express those feelings.  The next time you find yourself dealing with an Aspie, keep this in mind and be patient as they try to express themselves from behind their emotional cage.

NOTE: The “Asperger’s Emotional Cage” image above is composed of four emoticon images by nicubunu that are available from OpenClipArt.org: “Laughing Face“, “Crying Face“, “Loving Face“, and “Question Face.”