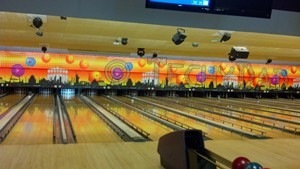 Earlier in the week, we took NHL and JSL out bowling.  NHL tends to get very competitive while bowling and can get upset because I bowl better than he does.  Then again, I DO have a few more years of practice.

When, after the first few frames, he was in the lead, he began to exclaim about how he was beating me.  I told him that it wasn’t nice to gloat about doing better than someone else because you never know when you will start doing worse.  I was only a few pins behind him and I figured that he’d blow a frame or two or my bowling would pick back up to my usual levels and I’d go ahead of him again soon.

I was so confident that I tweeted a lesson to be learned.

Then, in the eighth frame, with NHL only ahead by 3, all the pins went tumbling down on the first roll.  Yes, there was a strike.  Only I didn’t get it.  NHL did.

Suddenly, the pressure was on.  My lesson about not gloating was at stake.  I focused and got a strike as well.  But then NHL did something amazing.  Something I never expected him to be able to do.  He got another strike on his next throw.  That’s right, he got a double!  I couldn’t replicate it and fell hopelessly behind.  I wound up with 101 to NHL’s 119. 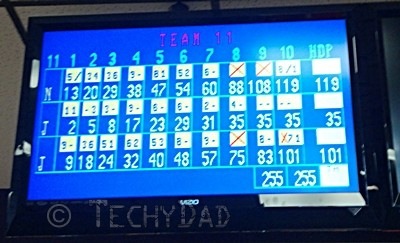 I guess it was bound to happen sooner or later.  NHL surpassed me in bowling.  I told him how proud I was of him.  Not for beating me, mind you, but for getting such a great score, his personal best.

The next game, NHL began by knocking 8 pins down.  He was feeling good and looked primed for another gloating session until I got a strike on my first throw.  And then a spare.  And then a nine and a spare and a strike.  He wound up with 88 to my 124. 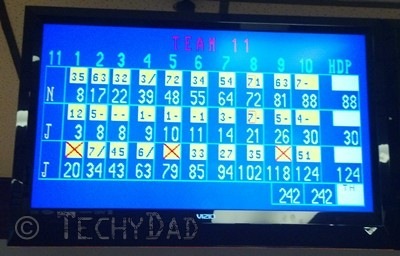 So I guess the lesson pulled through in the end.  Don’t gloat because you never know when your luck will run out and someone will do better than you.  I just didn’t expect it to apply to both NHL and myself.