Reptiles Up Close at CMOST 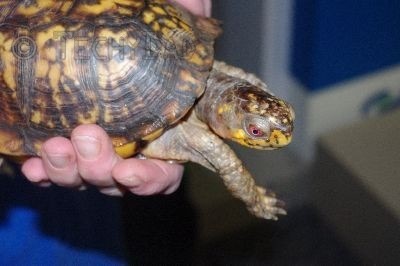 This past weekend, JSL had a birthday party to attend.  While B and him went to the party, NHL and I stopped by CMOST for some fun of a different kind.  B had taken the boys there recently, but it had been awhile since I had gone.

NHL showed me the Molecularium show in the planetarium and he loved going to each station to learn more about nanotechnology.  Of course, while that was fun, the photographer in me loved the reptile room the most.

First, there was a box turtle that they were taking care of.

Unfortunately, the previous owner had fed it the wrong foods.  (Raw eggs and chicken are NOT turtle food!)  Thanks to this, the turtle had developmental problems.  For example, one of its rear feet would periodically get stuck in its shell.  NHL, sadly informed the staff member that he hoped the turtle would get better.  The staff member let NHL know that while it wouldn’t ever recover, they would take good care of it.

NHL wanted them to take out the boa constrictor so he could see it up close.  Unfortunately, they said they couldn’t do this.  It had just eaten and moving it now would risk the snake either throwing up its food (and risking starvation) or puncturing an internal organ.  So the snake stayed in its cage to digest its meal over the next few months.  I was able to shoot a photo of it from behind the glass as it finished off a nice, yummy mouse. 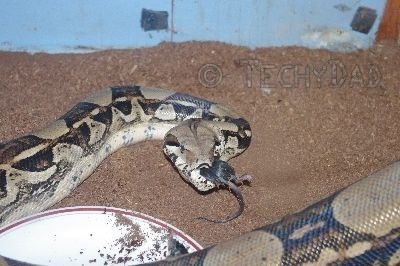 The leopard gecko kept staring at us from it’s log perch and we marveled both at its spots and its bumpy hide. 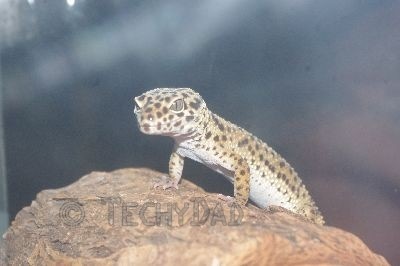 NHL loved the bearded dragon and begged me to take a photo of it.  (Quite impressive since he’s usually complaining that all the photos I take are slowing him down.) 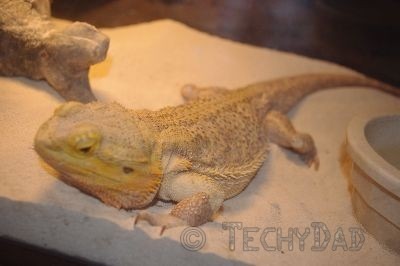 Later, we sat down as a staff member explained to us about some species of animals that live all along the Hudson River from the beginnings in Lake Tear of the Clouds to its ending in New York Harbor.  She fed some trout that they have and we sat awestruck as they went nuts splashing around trying to get a scrap of food.  They do feed the trout regularly, of course, but the trout seem to go nuts anytime there’s food present.  If I didn’t know better, I’d say they just loved putting on a show.

The stars of the show were the turtles, of course.

First up was the box turtle.  We got some more information about it.  For example, box turtles are so named because not only can they retract into their shell, but they have a special hinge and muscle that pulls the shell shut over their head.  This closes them in (like a box) so that it is almost impossible for predators to eat them.

Of course, predators should think twice before eating them anyway.  Box turtles can eat many things, including mushrooms that are poisonous to any other animal.  The toxins build up in their system making them a not-so-pleasant treat.  Early settlers quickly found out that they got sick when they made turtle stew from box turtles. 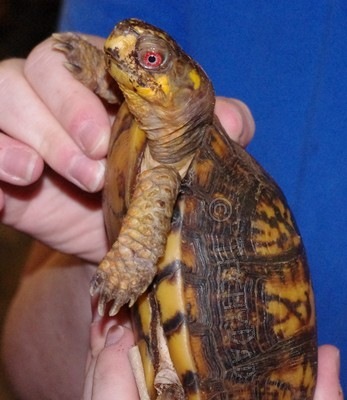 By the way, the red eyes mean that this is a boy.  Girl box turtles have brown eyes. 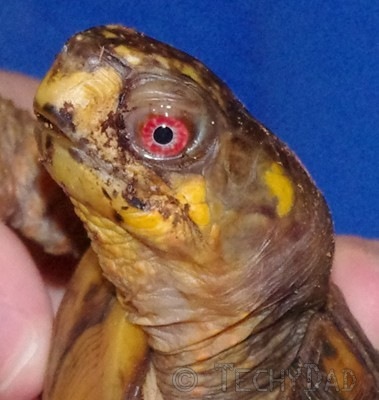 After this was the Diamondback Terrapin.  This turtle is more aquatic and loves spending its time swimming through the water.  While they usually eat small fish, the three brothers that CMOST has were raised in captivity and don’t know how to catch their own food. 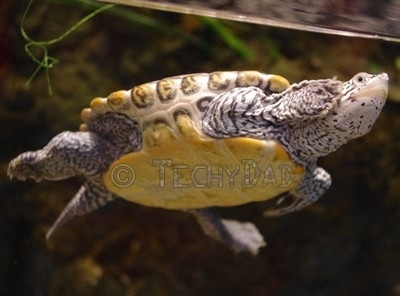 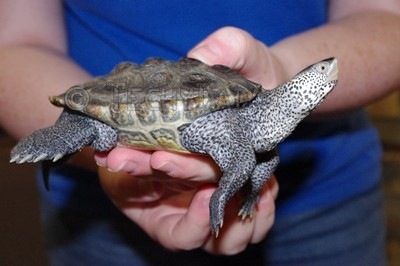 Many questions were asked by everyone attending.  I wondered how long the turtles could hold their breath.  After all, while watching them swim, it didn’t seem like they regularly came up for air.  The staff member replied that it is a long time, but they really don’t know how long exactly.  They’ve noticed the turtles going underwater to sleep for a few hours.  Quite impressive little turtle. 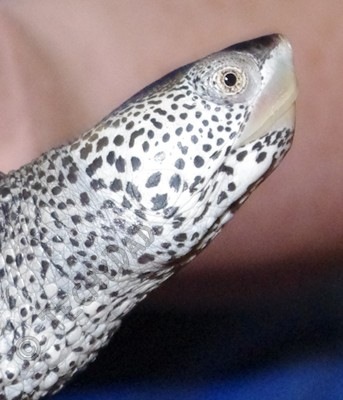 NHL and I had a blast at CMOST and left knowing a lot more about reptiles than we did before.  I just love visiting places that are both fun and educational.

What is your favorite kind of reptile?