The Double-Edged Sword of Technology 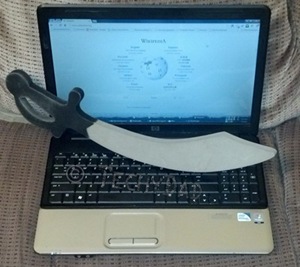 In a piece for the Washington Post, Robert J. Samuelson wrote that, were he in charge, he would repeal the Internet.  Though he admitted that the Internet brought with it some "astonishing capabilities", he claims these are more than offset by the existence of cybercrime and by cyberwar destroying "the institutions and networks that underpin everyday life."

Sadly, I think that Mr. Samuelson is overstating the risks, understating the rewards, and throwing the baby out with the bathwater.  Even worse, I think he might be more than a bit biased in his opinions.

First, let’s look at the risks of being online.  Yes, there are criminal gangs who would like nothing better than to hack into your computer.  Mostly, this is to use it to send out spam messages or to show you unwanted ads.  Sometimes, it might be to see what useful data is on your system.  More often, though, these criminals attack big companies.  Why grab little bits and pieces of data from individuals when you can break into a database awash with personal information.  One decent database breach can net you thousands of credit card numbers as well as enough personal information to steal the identities of tens of thousands of people.  Meanwhile, people from other countries would like nothing more than to cripple our country by hacking our utility companies, airports, stock markets, and more.

Scared yet?  Good.  But instead of cowering in fear and pulling the Internet’s plug (metaphorically speaking since it doesn’t have one in real life), let’s use that fear to spur some security upgrades.

Computers should run firewalls and antivirus software, both of which should be kept up to date.  People can be taught not to open any links they are e-mailed unless they come from a trusted source (and even then be suspicious).   They can be instructed not to run random software that they "bought" from a really cheap website hosted in Russia.  If that version of Photoshop was only $39 when it retails for hundreds of dollars, perhaps you should wonder just WHY it is so cheap.  As for those databases, they can be secured as well.

Of course, nothing is unhackable.  You can put fence after fence in the path of a hacker but some might still slip through.  This doesn’t mean you need to make it easy for them.  The more difficult you make it to hack in, the more you a) convince people to hack some other computer/server and b) require advanced hacking skills (which not every hacker might possess) to break in.  Raise the bar enough and your server, though not "unhackable", will be hack-proof enough to survive most attacks.

What about cyberwar?  For this, I’d recommend something that is indeed unhackable: an air gap.  This means disconnecting the sensitive computer or network from the Internet.  Why does a power company’s computer system need to be on the Internet?  Why would an air traffic control system?  Don’t connect these systems to the Internet and even the most skilled hacker won’t be able to penetrate them.  Want to see an air gap in action?  Try to hack the CIA’s sensitive information.  The CIA’s website might come under attack from time to time, but the actual sensitive information isn’t stored there or anywhere accessible from there.  (Documents might leak via people, but this isn’t an "Internet" issue even if said people post the documents online.)

Ok, so the risks, while there, aren’t so horrible and can be protected against.  Did Mr. Samuelson understate the rewards of the Internet?  Here, I must stop and admit my own personal bias.  I work as a web developer.  Were the Internet to disappear tomorrow, I’d be out of a job.  So, although there are plenty of economic benefits, I won’t focus on those.  Instead, let’s look at the social ones.

In addition, the people I did talk to would have a decidedly region-locked viewpoint.  With the Internet, I can talk to one person in New York, another in California, a third in Canada, a fourth in Australia, and a fifth in the Middle East.  Heck, I can even follow the tweets of someone orbiting the Earth in the International Space Station (@astro_luca and @AstroKarenN).  Try doing THAT sans Internet.

Furthermore, research would become a chore again.  Prior to the Internet, researching a topic meant going through thick encyclopedias (which sometimes might be a few years old), leafing through newspapers, or scanning through microfiche.  It was a slow and laborious process.  Nowadays, a few key Google or WIkipedia searches can get you much of your data.  While you should always back it up with better sources if your query is for a serious endeavor (e.g. a research paper), the Internet can jump start your research in ways that non-Internet methods can’t.

Is there a lot of fluff on the Internet?  Of course.  There’s a lot of trash too.  The key, though, is realizing that one man’s trash is another’s treasure.  I love Doctor Who and Disney.  So when I saw an image of a Dalek merged with Figment, I fell in love.  Someone without a passion for either of those, though, might look upon that image as a waste of bandwidth.  Meanwhile, I’m not a fan of Game of Thrones and so wouldn’t appreciate a parody video of it while a fan might find it the funniest thing he’s seen in months.

No technology is without its risks.  Television can be used to educate (Sesame Street) or to play mindless fluff like some reality shows.  Cars can be used to speed travel or to run someone over.  A hammer can build a building or bash in a skull.  Electricity can light our way or fry us to a crisp.  Nuclear power can generate electricity or blow us up.

Technology isn’t evil by itself.  It is only a tool.  People make those tools do some wonderful things and some horrible things.  If we banned technology every time someone used it for the wrong purposes, we’d be back to living in caves.  (No fire, though.  You might burn someone with it so it’s banned.)  Ditching the Internet just because a few malcontents and thieves misuse the power it grants doesn’t make any sense whatsoever.

Where The Bias Lies

So why would Mr. Samuelson want to turn off the Internet?  Perhaps the answer lies in where he works: The Washington Post.  The Post, along with many other newspapers, used to be THE source of up to date information about national and world events.  If you wanted to see who won the Presidential race or what was going on in other countries, you’d pick up the newspaper and read.  All the news would be printed there for you – or at least all the news the editors deemed fit enough.

With the advent of cable news, newspapers began a decline.  After all, they printed once a day.  Maybe twice if they ran an "evening edition."  Cable news programs, however, could update stories on a minute by minute basis.  If a big, important court case was nearing a verdict, you could read about it in the paper the next day (if they were able to stop the presses) or you could tune in and watch it happen live.

Once the Internet became popular, though, the floodgates were opened.  Suddenly, news could be relayed instantaneously about any topic.  You didn’t need to worry about the fact that CNN or the Times didn’t cover elections in Peru.  You could look at a few Peruvian websites to see how things were going.  Once social media took off, information would even spread from person to person.  Yes, this means that rumors can spread fast as well, but that’s a risk with the old methods as well.

With the news speed turned up to Ludicrous, newspapers just couldn’t keep up.  Some have managed to slow their descent, but many have gone out of business or are headed that way.  Were the Internet to go away tomorrow, newspapers (and columnists like Mr. Samuelson) would benefit greatly.

Sorry, Mr. Samuelson, but the Internet isn’t going away.  Yes, there are plenty of risks, but there are way more rewards.  And while I might need to dodge a hacker or stalker or troll here and there, I wouldn’t trade being online for all of the printed encyclopedias and microfiche in the world!