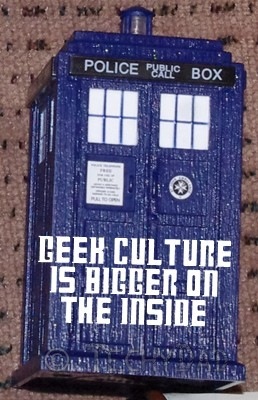 It’s no secret that I’m a geek.  I love science fiction – Star Wars, Star Trek, and Doctor Who in particular.  I’m a big super hero fan and love all things science.  (Well, except maybe Quantum Mechanics – freshman year of college scarred me for life with that.)

Every so often, an aspect of geekdom holds a meeting.  Some of the biggest are the various ComicCons that take place around the world.  I’ve never been to a convention, but have always wanted to go and love seeing photos of my fellow geeks dressing as their favorite characters.  Sadly, I’ve heard stories of a dark undercurrent in geek culture.  One that tries to push fellow geeks out of the fold.

Women of all ages and interests are being told that they aren’t "real geeks." They are being told that they are only attending conventions to "seduce" geeks or that they are only trying to gain attention for themselves.  It’s obvious to these self-proclaimed "real geeks" that these women are just pretenders and should be shunned and made fun of until they go away.  Or worse.  (Some women have to endure sexual innuendo directed at them that I wouldn’t repeat here.)

To me, there is a fake geek here.  Only it’s not the women indulging in their interests.  It’s the guys who are trying to exclude someone based purely on their gender.  Like many geeks, I was picked on mercilessly in high school.  Of the many lessons I took from this, a big one was to always treat people how I want to be treated.  I don’t talk down to people, I don’t make fun of people, and I DON’T exclude people on the flimsiest of excuses.  These self-proclaimed "real geeks" would do well to remember this lesson.

Will some of those people not be as neurotically obsessed with every minutia of a subject?  Of course, but you can’t tell those with more casual interests and those with more intense interests merely by the presence of a Y chromosome.

However, even if someone’s interest is casual and not intense, there isn’t any geek culture bouncer who gets to decide who is in and who is out.  Not me and certainly not those self-proclaimed "real geeks."  Ok, maybe there should be one exception: Anyone who positions themselves a "real geek" and tries to exclude someone else from geekdom should themselves be cast out.

I’m raising two geeky boys.  I’ll likely never need to worry about them being excluded from geek culture based on their gender, but that doesn’t mean that this subject will never be brought up.  I’m going to make sure I raise my boys to accept geek girls into geek culture and to appreciate them for their interests .

Unfortunately, there were too many submissions to include in one music video so The Doubleclicks are posting additional images (and accepting new submissions) at http://geekgirlvideo.tumblr.com/.