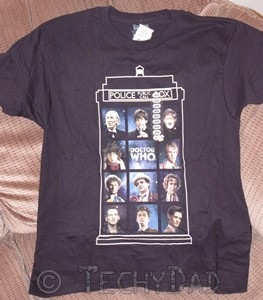 Recently, Doctor Who fans were saddened to hear that Matt Smith was stepping down from playing the eleventh Doctor.  We had grown to adore his eccentric Doctor who loved fish fingers and custard (but not beans… bad, bad beans), thought fezzes and bowties were cool, and got married to River Song who constantly warned of spoilers.

After months of speculation, it was announced that Peter Capaldi would be taking over as the twelfth Doctor.  This will take some getting used to.  Every actor brings their own spin on the character of the Doctor.  Some are more action oriented.  Some are more comedic.  Some wear leather.  Some wear long scarves.  Some rely on their sonic screwdrivers and some shun the device.

There is a usual progression that happens for fans when the Doctor regenerates.  At first, everyone goes into mourning over the loss of the current Doctor.  We bemoan the voyages we could have had with him.  The places and times we could have seen.  The stories left to tell.  Then, the replacement announcement is made.  Some cautiously accept it and some reject it declaring that there’s no way this actor could play the Doctor.

Finally, the time comes and the Doctor regenerates.  A few episodes later, we realize that this new Doctor is fantastic.  He’s very different from the old Doctor but that’s the strength of the show.  The actors change and so does the Doctor.  The show survives any and everyone in it.

My boys are going through this cycle for the first time.  They just watched the two part episode "Bad Wolf" and "The Parting of the Ways."  They saw the ninth Doctor in pain.  Every cell in his body was dying and so he did what Time Lords do to cheat death.  He regenerated.  After some final farewells in his current form, golden energy shot out of his head and arms.  Gone was the ninth and the tenth took his place.

Honestly, the tenth Doctor (played by David Tennant) is my favorite Doctor.  NHL seems excited to see what comes next.  He’s already accepted the new Doctor and is moving on. JSL, on the other hand, is deep in mourning.  He has declared that the ninth Doctor is his favorite and will always be so.  He wants to see more ninth Doctor episodes (even though he knows there aren’t any).  He’s deep in Doctor Who Mourning.

I know he’ll get over it.  A few episodes in, he’ll be declaring how Doctor 10 is his absolute favorite.  And, before he knows it, he’ll be crying over the tenth’s departure and the eleventh’s arrival and then again for the eleventh’s switch to the twelfth.  There’s something bigger about seeing your first Doctor regenerate, though.

Still, we’ll got to forge ahead.  He might look and act differently, but he’s still the Doctor.  He’ll still have fantastic adventures throughout time and space.  As my boys will soon find out that Doctor 10 is fond of saying: Allons-y!