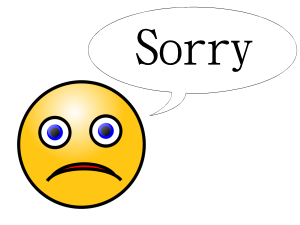 Tonight starts Yom Kippur, the Jewish Day of Atonement.  During this time, we fast for 25 hours.  (That’s 25 hours without food or drink.  No, not even a sip of water!)  The purpose of this is to help focus on everything we did wrong in the past year, to seek forgiveness, and to think of ways we can be better in the coming year.

This doesn’t just apply to religious rules, though.  Seeking forgiveness is important in your person-to-person relationships as well.  (In fact, Judaism says that God won’t forgive you for a sin committed against another person until you first seek that person’s forgiveness.)

Sadly, many people find it apologizing tricky.  They either don’t realize they should apologize or give half-hearted efforts that fail miserably.  Worse still, some people will go through the apology steps and then will proceed to repeat the behavior that the  apology was issued for.  So how does one apologize properly?

If you don’t feel sorry, your apology will fall short of the mark. So before you even begin, you should make sure that you actually mean your apology and you aren’t using it to "get out of jail free."  This isn’t to say that you should just do bad things and not feel the need to apologize.  If you wrong someone, you should give a heartfelt apology, but the heartfelt part is a requirement, not an afterthought.

Nothing adds salt to the wound more than an apology which starts off fine but veers into "but it was really this other person’s fault!"  It’s even worse when you turn it around and blame the person you are apologizing to.  Yes, things are rarely black and white and situations might have blame enough to cover both sides.  However, an apology is not the time to quibble over who is to blame for which portions.  An apology is the time to take responsibility for your actions and try to make it right.  If you apologize right, the other side might even reciprocate and apologize for their portion.  If they don’t?  Well, as I often tell my kids: You can’t control other people’s actions, only your own.  They might be in the wrong for not apologizing, but your concern should be that you did the right thing, not that they did the wrong thing.

This is similar to "Don’t Shift Blame" but here you try to give a reason that you see as acceptable to explain your behavior.  This can be very tricky to do right and should be avoided where possible.  If you do feel the need to give a cause to your actions, make sure to emphasize that it is an explanation for your action and that it in no way makes your action acceptable.  However, people might still take offense and see your explanation as an excuse so it’s best to just leave this off entirely.

Saying "sorry" and then immediately doing the same thing over again doesn’t work.  The person might accept your first apology, but they won’t accept your second or third or fourth.  Similar to the boy who cried wolf, people won’t believe you even if you eventually decide that you WILL change.  Your apologies will only be empty words.

Don’t use "sorry" as license to do whatever you want without repercussions.  Actually make an effort to alter your behavior in the future.  Even if you have relapses of your apology-worthy behavior, people will continue to forgive you if they see you making an effort to change.

Do you find it difficult to apologize when you’ve wronged someone?

NOTE: The "sorry" image above was created using the "Emoticons: Sad Face" image by nicubunu which is available from OpenClipArt.org.