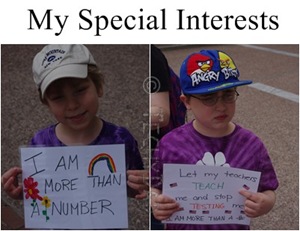 Our government is built upon a foundation of accountability.  We elect people to serve our interests in government.  If they don’t do a good job, we can kick them out next election cycle.  It’s not a perfect system, of course, but it’s pretty good overall.

This style of government was – in a big way – influenced by the events 240 years ago.  In 1773, the colonists revolted against the British Parliament for not having a say in how they were being taxed.  Today, parents, teachers, and students find themselves the ones without representation.

Throughout the country, Common Core and Race To The Top are being implemented.  Though I’m a fan of having a nation-wide education policy, in general, Common Core is just badly written and its implementation winds up giving corporate interests more say in our children’s education than we have.

In New York State, our kids were subject to a series of high stakes tests.  We were warned that scores would be low but that this would be a "baseline" by which future success would be measured.  Considering that only 30% of kids passed the tests, I’d say we’re setting the bar pretty low to start with.  The biggest issue here is the accountability, or the lack thereof. of all of the parties involved.

I’ve written before about Pearson education and how the lack of oversight on the tests combined with their business interests (selling textbooks and courses) gives them a clear incentive to have students do poorly on the tests they design.  Today, I’d like to focus on Commissioner John King and the New York State Education Department.

The New York State Education Department (NYSED) gets to decide education policy for all of New York State.  Districts can decide not to abide by some rules, but NYSED can "lean on" them to get them in line (for example, by withholding funding).  So when NYSED says the high-stakes tests are going to take place, local school districts have little say in the matter.

Voters don’t get to choose NYSED members – they are appointed by the legislature.  We do vote for the legislature, but many times legislators either feign ignorance or are purposefully ignorant as to what is happening in the education system.  It’s better (in their minds) to act outraged that high stakes testing isn’t making our kids’ education better and promise to get to the bottom of it, than it is to know how bad the situation is beforehand and risk being blamed.  Furthermore, the Commissioner gets appointed by the NYSED’s Board of Regents.  He is two steps removed from any voter accountability.

Recently, Commissioner King held the first in a series of town hall meetings intended to open a dialog with parents and teachers who were unhappy with the state’s overemphasis on tests and with Common Core.  (You can watch the town hall here.)  Parents and teachers who attended were told they would have an hour to make statements.  In fact, only a half hour at the end was allotted for statements.

To make matters worse, John King interrupted the statements period so that he could rebut the statements.  When the crowd got upset that their limited time was being eaten into, King remarked "We’re not going to go on until I speak."  Understandably, this met with resounding boos from the attendees.  At least one parent was escorted from the grounds by the police which soured the crowd even more.

After twenty minutes, the statements period was closed out and parents were told that those with written statements could hand them to a representative instead.  Commissioner John King ducked out the back to avoid any further parent interactions.

I was looking forward to engaging in a dialogue with parents across the state. I was eagerly anticipating answering questions from parents about the Common Core and other reforms we’re moving ahead with in New York State. Unfortunately, the forums sponsored by the New York State PTA have been co-opted by special interests whose stated goal is to ‘dominate’ the questions and manipulate the forum.

The disruptions caused by the special interests have deprived parents of the opportunity to listen, ask questions and offer comments. Essentially, dialogue has been denied. In light of the clear intention of these special interest groups to continue to manipulate the forum, the PTA-sponsored events scheduled have been suspended.

Let’s break this apart bit by bit, shall we?  First of all, he "was looking forward to engaging in a dialogue."  The last time I checked, a dialogue is an even back and forth.  If one person has all the speaking time and attempts to silence all dissenting opinions, it’s not a dialogue, it’s a monologue.  Dictionary.com agrees, calling it a "conversation between two or more persons."  It sounds to me like Commissioner King was actually expecting to monologue his way through the town hall meetings and didn’t expect to hit any dissenting opinions along the way.

Next, there’s his mention of "special interests" who "dominated" the questions.  The people who attended the meeting were parents and teachers.  Was he seriously calling concerned parents a "special interest"?  Or was he referring to the teachers who have seen firsthand the damage this is doing to our kids?  I, for one, am willing to embrace the label as I have two very special interests in the educational system:  They’re called my children!

He also mentioned how they dominated the forum.  The last I checked, during the two hour forum, King spoke for about an hour and a half.  He left only twenty minutes for questions and during that time he interjected to talk more.  If anyone dominated the discussion, it was Commissioner King.

I agree with Commissioner King.  Dialogue has been denied.  It wasn’t from some "evil" grouping of teachers and parents, though.  It was denied by Commissioner King himself.  He tried to manipulate the forum to his benefit, failed miserably, and then tried to pass blame to everyone but him.

Even now, people are calling for King’s resignation.  Sadly, I don’t think this will cause real change.  Instead Commissioner King will likely become a scapegoat.  He will be publicly fired and blamed for the fiasco.  Then, they will appoint a new commissioner to continue on the same over testing path hoping that parents and teachers will be placated by this token gesture.

Don’t fall for it.

The goal here is not Commissioner King getting the boot.  The goal here is to ensure a good educational future for our children.  The goal is to make sure that our kids don’t dread going to school because they’ve got test after test to take.  The goal is to stop punishing creative students because their answer doesn’t fit into the box that Pearson has drawn for them.  The goal is to allow teachers to assess how their particular students will learn best instead of forcing them to follow a "one size fits all" plan that actually fits nobody.  We cannot be distracted by a show firing because what is riding on this is our children’s future.