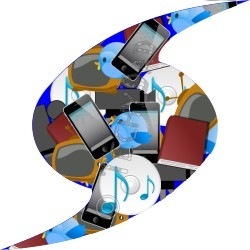 There are about a billion of websites on the Internet.  Of those, millions are blogs.  Those blogs produce between a dozen and a few thousand new posts every year.  Then there are the thousands of movies, TV shows, games, songs, books, and other forms of media released every year.  Just for good measure, mix into this the millions – if not billions – of status updates, photos, and videos published to social media sites such as Twitter, Facebook, and Google+.  It’s easy to see how we are drowning in content nowadays.

On this blog alone, I have over 1,200 posts published.  Many of them – I’m sure – are updates that would interest almost nobody.  Some might interest a small group.  A couple might actually interest many, many people.  If only people knew about them.

The problem is that a good post can easily be lost within the swarm of other status updates, videos, and thousands of other posts.  It’s like trying to hear a cricket chirping… from across town… while a category 5 content hurricane is blowing.

There are many people who know many good ways of amplifying your volume.  The problem is that these take time and effort.  My problem is that I’ve got a day job.  This isn’t a "problem" per se – I really like my day job and in this economy there are lots of people who would love to have one.  The problem is that many hours of my day are dedicated to "doing the day job thing."  Subtract time to pay attention to the kids, do chores around the house, cook, etc, and I barely have time to write my blog posts – much less spend hours promoting them.  So I just keep chirping into that content hurricane hoping that someone hears me and likes what they read.

On the flip side, as a content consumer rather than content producer, it almost seems like there are never enough hours in the day to see everything I want to see.  My feed reader is hardly packed with hundreds of thousands of blogs and yet I rarely seem to be able to knock the number of unread items below triple digits.  When I started out on Twitter and was following only a few people, I would read every status update that was made.  Even when I took a day off of social media for Shabbat, I would go back in my timeline to where I left off and would spend some time catching up.  This just isn’t possible anymore.

If I spent my entire day reading blog posts, watching TV shows, looking at Instagram photos, reading status updates, and watching YouTube videos, I wouldn’t even scratch the surface of what I’d like to see.

One of my favorite movies of all time is Short Circuit.  In this movie, a military robot accidentally becomes alive and sentient.  Instead of wanting to destroy, however, Number 5 decides that all he wants is to live in peace and consume information.  In the sequel, Short Circuit 2, this is expanded upon when Number 5 – now called Johnny Five goes to the city and discovers a book store.  He goes from book to book flipping through them absorbing their contents in seconds.  Though it is a big bookstore (for the 80’s), he is able to absorb all of the information rapidly.

I wonder what would happen if Johnny Five were to be released in the present day, however.  No matter how quickly he could flip through a 700 page novel, consume an RSS feed, watch a TV show or movie at extreme fast forward, or listen to music songs, there would still be more to see.

The Internet brings what often seems to be unlimited content to you and this can be a blessing or a curse.  It is nearly impossible to be bored – boredom merely means that it is time to seek out new and interesting feeds/games/videos/etc.  On the flip side, you can feel left out when you are unable to keep up with all of the content that all of your friends are watching (even if said content is spread over your friends and they each aren’t watching it all).  Going back to the hurricane analogy, you are a fly buzzing about as the category 5 content hurricane blows.  Every time you think you have found some stability, another blog post or YouTube video or app comes out of nowhere to strike you.

Whether you are a cricket chirping or a fly buzzing – a creator trying to get your work viewed or a consumer trying to keep up with the latest content – it’s a dangerous and information packed world out there.  Stay safe.

Note: The "content storm" image above was created by combining the following images from OpenClipArt.org: Hurricane Symbol by TheByteMan, Generic Book by dniezby, Movie Camera by schoolfreeware, Music Icon by Minduka, Iphone 4 by Ts-Pc, Cutie Bird by Luen, and Cartoon TV by rg1024.