An Open Letter About Asperger’s Syndrome 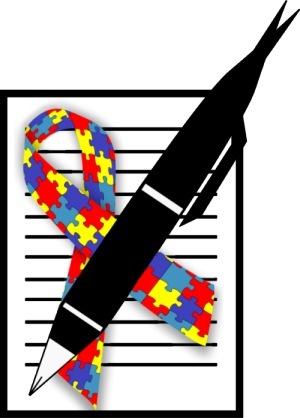 As of this writing, I’m still wavering on whether I should send the e-mail or not, but I did decide to post a version of it here.  I’ve edited it to remove some personal references, but the overall tone remains the same.

If you encounter a relative who thinks they know more about Autism than you do and who "knows" that the doctor who spent hours on the diagnosis is wrong because "he/she seems so normal" to them, feel free to either send them the link to this blog post or to use this as the starting point for your own letter.

I know you mean well when you say things like "NHL acts too well to have Asperger’s", but it just winds up as insulting.  I wanted to clear up a few points.

Secondly, we live with him every day.  We see behaviors and actions that others just don’t see.  For example, NHL stims when he’s overwhelmed.  (Stimming = self-stimulation and can take the form of flapping arms, clapping, spinning around, picking fingernails, or other actions that help calm the person down.)  NHLs stimming of choice right now is slapping himself.  He’ll get overwhelmed and will start slapping his chest or knees with his hands.  He rarely does this in public, but will do it often when at home if he’s stressed.  (For example, if his homework assignment is tough and getting him upset.)

NHL will also melt down if things don’t go according to the plan he had in mind or if he is anxious about events.  All too often, I’ve had to drag NHL out of a store while he screamed bloody murder because keeping him in the situation will only lead to a bigger melt down.  When the situation is too stressful for him, he needs to be removed from it to help him calm down.  He won’t "just get used to it."  It will just spiral more and more out of control.

I think one of the main problems is one of perception.  Some people still view Asperger’s as some horribly stigmatizing illness which will make the person suffering from it unable to function properly in society.  This couldn’t be further from the truth.  People with Asperger’s Syndrome typically have social issues, but they also can be extremely intelligent – as NHL certainly is.  They can learn to adapt to neurotypical society.  (Side note: Please get in the habit of using the word "neurotypical" instead of "normal.")  NHL is getting help with adapting not just from B and me, but from his teachers and other school staff.  He’s also learning how to be an advocate for himself and how speak out when people don’t treat him right.

NHL won’t ever be fully neurotypical and will find himself in situations from time to time that he just can’t deal with, but even then he’ll have methods on-hand that he can use to minimize the damage (so to speak).  An adult Aspie friend of mine pointed out that she’s mastered "delayed meltdowns."  She can feel like she can’t take any more on the inside and look perfectly fine on the outside.  Then, when she gets the first chance, she can go off on her own and cry/scream/etc until she feels better. 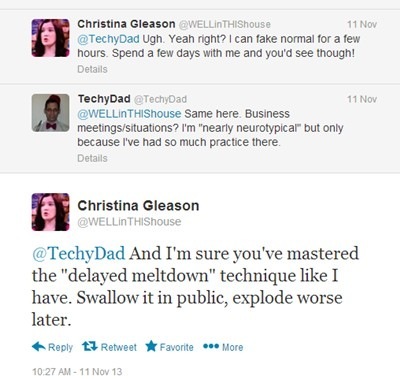 Many people with Asperger’s go on to be very well known in their fields.  Some even become rich and/or famous.  Daryl Hannah and Dan Aykroyd have Asperger’s Syndrome and yet that hasn’t stopped them from having successful acting careers.

It’s not a matter of "growing out of it" or "being cured of it."  It’s a matter of "emulation."  Aspies’ brains tend to think in IF-THEN formats.  IF this happens THEN this should happen.  IF someone says this to me THEN I should do that.  This happens to be very useful when dealing with computers (probably one reason why tons of people in the computer industry are Aspies), but this is awful for dealing with social situations.

Social situations are filled with shades of grey where tiny nuances determine whether a response is completely appropriate or horribly offensive.  Aspies are really bad at interpreting these nuances, but they can build rules in their heads over time that help them deal with those social situations.  Like how a computer can "emulate" another computer.

Unfortunately, just like the computer emulation analogy, an Aspie emulating neurotypical social behavior will find this slower than a "native neurotypical" and more mentally taxing.  They won’t be able to socialize for as long without breaks and unexpected social situations can throw them for a loop.  For example, I’m great at business meetings because I know the social expectations and reactions needed.  Put me in a party situation, though, and I’ll quickly get overwhelmed and will try to find the nearest exit.

Just as an aside, saying that someone has Asperger’s isn’t an insult to anyone.  Adults with Asperger’s aren’t criticizing their parents for "not doing enough" or for "being bad parents."  The days of Asperger’s being blamed on "refrigerator mothers" is long over, thank goodness.  While we don’t know exactly what causes it, our best guess is that it is mostly a matter of genetics.  You wouldn’t blame parents for "giving" their child Asperger’s Syndrome any more than you’d blame them for giving their child juvenile diabetes.

I’ve long thought of myself as "different" from other people.  I’ve blamed bullying for "stunting my social growth", but if it was just that then I should have "caught up" by now.  After all, it has been twenty years since I graduated high school.  However, while I’ve gotten better, I still have moments where I just get overwhelmed, or locked into something.  Sometimes, I can recognize what is happening, but all too often I just can’t control it.

I could go for a diagnosis.  I know adults who have.  However, money is tight and a diagnosis wouldn’t be cheap.  Even if I got one, it wouldn’t help NHL at all.  So, until money is no object, I’ll remain an "undiagnosed Aspie", but will use my experiences to help my son.

(Side note:  Though this online Asperger’s Syndrome test isn’t conclusive, it is pretty interesting.  If you get a 32 or above, you likely have Asperger’s.  I got a 36.  When B took it for comparison purposes, she got a 10.)

We know that NHL is going to be a success at anything he puts his mind to.  The key is giving him the help and support he needs so that he can get up to speed socially as well.  There is no shame in saying he has Asperger’s Syndrome.  Nobody is going to hold it over his head, deny him a job, or lock him in a rubber room because of it.  It doesn’t reflect poorly on me, my wife, my parents, her parents, or anyone else that NHL and I have Asperger’s.  It’s just a fact of life that you deal with.

Like I told NHL one day when he spotted a child in a supermarket who only had one hand:  "Everyone in life has challenges, but not everyone’s challenges are readily apparent.  That boy’s challenge is that he has one hand.  You can see that by looking at him.  Our challenge isn’t physically visible, though, so people might not see/know what our challenge is."

As a final point, I didn’t mean anything that I wrote to come across as mean-spirited so please don’t take it as that. The fact of the matter is that I just communicate better via written word than via spoken word.  All of the words are there in my head forming perfect arguments as to why things are the way they are.  Unfortunately, they tend to get jumbled when they spill out of my mouth.  Many of the words get lost and the ones that make it out don’t have the impact that they had in my head.  Furthermore, interacting with counter-arguments on the fly is a "social situation emulation" that I find particularly taxing.

With writing, however, I can phrase my argument carefully.  I can type out the words, go back and edit a few more in (in case they got lost on the way over), rearrange some paragraphs to better illustrate my point, and more.  I can carefully craft my argument before anyone even gets to see it.  When counter-points are made (in a written reply), it doesn’t matter if my "emulation" is running slow.  I can counter the counter-argument at my own speed without the individual standing there, growing impatient as to why I haven’t answered yet.

Of course, there is no way that I could fit everything about Asperger’s Syndrome in one letter just as there is no way I could fit every single reason why NHL is an Aspie or every last instance where NHL’s Aspie nature was readily apparent.  Furthermore, dealing with other people with Asperger’s Syndrome is no guarantee of being able to spot an Aspie.  There’s a saying in the Autism community:  If you’ve met one person with Autism/Asperger’s Syndrome, you’ve met one person with Autism/Asperger’s Syndrome.  Sure, many with Asperger’s will share similar general traits, but the specifics and which traits are present vary from person to person.  Just like every neurotypical person is different from every other neurotypical person.