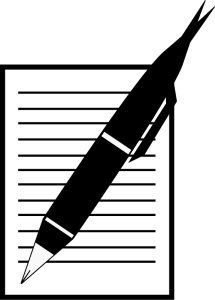 It was bound to happen eventually.  We sat NHL down by the computer so he could type out sentences to his spelling sentences.  As I was preparing dinner, I looked over and saw one of his sentences.  Only there was a problem.  It was way too advanced a sentence for him to have written.  I asked him and he admitted to having looked up words on Dictionary.com to be sure of their meaning.  While he was there, he noticed that they had the words in sentences.  Just what he needed.  Copying them would save a lot of time, right?

I knew then and there that it was time to introduce NHL to another word: Plagiarism.  I told him that he couldn’t just copy someone else’s work and try to pass it off as his own.  First of all, the assignment was for him to write out sentences.  Copying someone else’s work is not fulfilling the assignment.  Secondly, the purpose of the assignment is to learn how to use the words that he is being introduced to.  Grabbing sentences from the web isn’t teaching him anything.  Third, stealing someone else’s work and passing it off as your own isn’t fair to the original author.  I asked NHL how he’d feel if someone stole something he wrote and told people they had written them.

Sadly, too many people don’t learn this lesson this young.  Some go through life thinking that passing someone else’s work off as their own is perfectly acceptable.  Others learn their lesson later in life when the consequences are more dire.  These consequences can range from public shaming to losing your job or being kicked out of school.

In a way, I’m glad that NHL tried to plagiarize so young as this lesson is an important one to learn as early as possible.  Just like with Google Image Searches, text on the Internet is not free for the taking.  It can definitely be tempting, but you can’t just take text from Wikipedia or another source, use it in your own work.

NOTE: The "pen paper" image above is by aungkarns and is available from OpenClipArt.org.