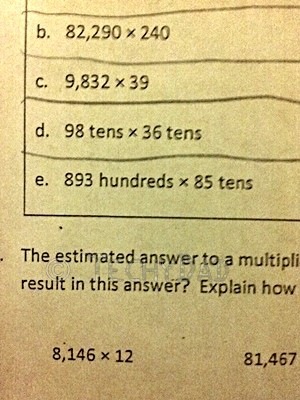 This past weekend, NHL and I got our eyes checked.  As we needed new glasses, we picked out new frames and they rang us up.  After adding in frames, taking off what insurance covered, and accounting for co-pays and add ons, our total was around Twenty Two Tens dollars.

If you are scratching your head wondering just what type of figure this is, let me back up a bit.

I was helping NHL with his math when we came to the last two problems here:

The problem is that nobody in the real world speaks like that.  When I said that our glasses cost 22 tens, you probably thought it was some kind of weird typo.  If you were looking at a car, the dealer won’t quote you a price of $150 hundreds dollars.  They’ll call it fifteen thousand dollars.

So why are they framing the numbers in such an odd way?  To be honest, I don’t know.  Perhaps they want to stress the "tens place" or "hundreds place" with the numbers, but what they are ending up doing is confusing the kids.  NHL actually argued with me when I called 9,830 "nine thousand eight hundred thirty" instead of "nine hundred three tens" like he’s been taught in school.

As he encounters numbers in the real world, though, he’ll wind up being confused and will need to spend more time and effort learning the real-world method of talking about numbers.  Common Core purports to prepare students for college, but by teaching numbers in this manner, they are only preparing students (and parents) for nothing but more and more confusion.