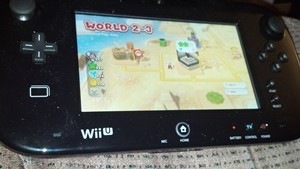 We recently got a WiiU (thanks, GeekDads).  As I hooked it up, I figured that it would let us play some new games – perhaps with better graphics – but I didn’t think it would radically change how I play console games.  Boy was I wrong.

The core of this change is the WiiU’s new tablet-controller.  When I first saw photos of the controller, I figured it would be a huge failure.  After all, it was very bulky compared to the Wii’s minimalistic controller.  What I didn’t consider, though, was the multi-tasking possibilities.

Suppose I want to play Super Mario 3D World, but B wants to watch The Colbert Report.  Previously, our only option that would let both of us do what we wanted would be having B go into the bedroom to watch.  Now, however, I can use the WiiU tablet controller’s screen to play a game while B uses the TV to watch a show.  In addition, thanks to the tablet controller having a headphone jack, I can listen to my game without bothering B as she watches her show.

The downside to this? Games are now much easier to pick up and play on a whim.  For example, as I try to write this, the tablet controller is beckoning me to play just one more level of Super Mario 3D World.  I can see this becoming a dangerous addiction.

NOTE: I won the WiiU and Super Mario 3D World from a GeekDads giveaway.  However, I wasn’t asked to blog about it at all.  I just felt like writing about it.