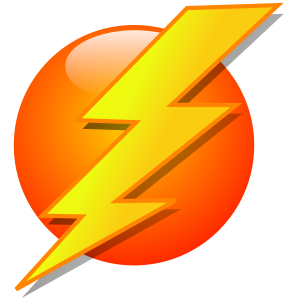 I like to think that I have many talents.  I write, I code, I can remember tons of useless trivia (as every geek should).  However, there’s one talent that I’d love to give up if I could.  In fact, it’s gotten to the point that I’m beginning to suspect that it’s a secret superpower of mine:  I’m positively electric.

Maybe it’s the dry winter air, but recently every thing I do seems to build up a static charge.  Sit down on the couch?  Charge.  Stand up?  Charge.  Walk across the room while wearing rubber Crocs?  Charge.  The charge then gets released anytime I touch anything.  There’s the usual light switches or electronic equipment (like my computer) and the unusual (getting shocked THROUGH my rubber Crocs or on the non-metal portion of the stove).

It’s gotten so that NHL cowers in fear whenever I approach him.  He doesn’t want me touching him for fear that he will be shocked.  Oddly enough, though, JSL seems thrilled to be shocked and gets disappointed when I don’t zap him.  I think he’s purposefully trying to be the opposite of his brother.  Either that, or I haven’t gotten him with a big shock yet.

As far as superpowers go, this really stinks.  I’m not immune to my own power so I feel the pain of every jolt of static electricity.  Every time I reach for a light switch, I cringe.  Every time I grab my computer, I fear the inevitable shock.  Even while simply walking, I can often feel the static charge building and know that it can be released at any moment.

My only hope is that this super power is super charged by winter’s dry air.  As soon as spring rolls around, my shockings should get fewer and fewer and I’ll be able to touch my loved ones without them leaping away or cowering in fear of my electric touch.